Gunfight In The Snow

I'd arranged to host a 6-player gunfight game at club this week, so I decided on a change from the normal Wild West game and set it on the Canadian border during Prohibition.

“Frenchie” Le Rus has been running moonshine across the border for the last 12 months or so, but now he has heard that “Lumberjack” Watson is trying to muscle into his patch. Word is that “Lumberjack” is doing a deal with a bunch of Yanks at a deserted farm near the border, so “Frenchie” is going to crash the party and teach that Angie a lesson!

“Lumberjack” Watson has met up with Tony "No Nose” Calzonne to sell two truckloads if finest moonshine at a deserted farm on the border (at least it’s deserted now, after the owner was “persuaded” to take a vacation for a couple of days).

An informer has offered details of a illicit liquor deal going down, so Sgts Smith and Miller of the RCMP have been tasked with catching the criminals. To prevent then escaping across the border, Sgt O'Grady from the Chicago PD will move in from the south and support the Mounties.

At the farm everything was going well until a lookout spotted men moving in from all sides………..
and then all hell broke loose! 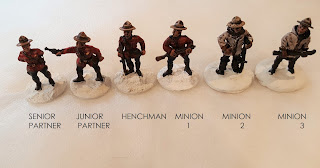 The players got Victory Points for escaping or capturing a truckload of booze, killing/arresting a particular gang leader (or in Tony's case, if he escaped). Law enforcement players would also share VPs for any unattended trucks at the end of the game. Law enforcent players lost a VP for every casualty, gangsters lost 2 VPs for each character (partners or henchmen) lost, they could always hire more minions.

The start of the game. Sgt Miller is coming in from the left, Sgt Smith from the right. Tony "No Nose" and his boys are by the house in the middle of the table and Frenchie's gang are in the big barn. Lumberjack and Sgt O'Grady are out of shot, entering from the near and far edges respectively. 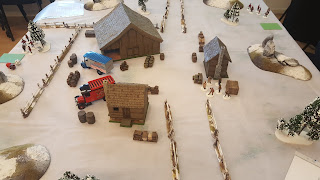 Things started bloody around the barn, two of Frenchie's men came out shooting and each downed a Mountie, but only inflicted light wounds so they would be up and back in the fight next turn. The return fire was deadly and both of Frenchie's minions would be dead by the end of the turn. 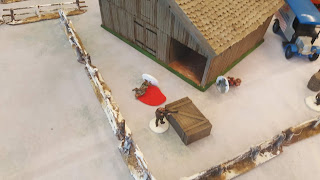 Meanwhile Lumberjack and his gang move in on the trucks. 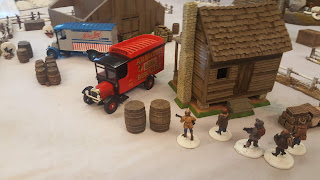 No Nose seemed to forget his objectives completely and rushed onto the nearby rocky hill to take on Sgt Smith in a firefight. They took down a Mountie, but Tony was wounded by the return fire. 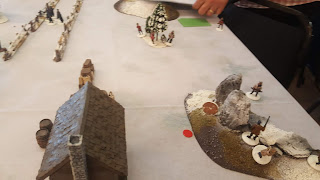 Sgt O'Grady had drawn the short straw and was the farthest away from the action by the bridge. As none of the criminals showed and sign of making a break for the border, he decided to lead his men forward to get stuck in. 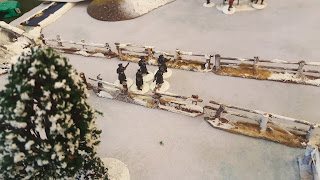 As the Chicago police caught up, they spotted Tony "No Nose" on the hill. Their orders said to bring Tony in for trial, but as he was responsible for the death of several CPD officers, O'Grady wasn't fussed about the trial. The police lined the fence and poured fire into Tony's men on the hill. Tony was hit again, but only a slight wound this time. 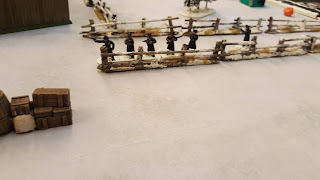 Sgt Miller split his patrol to advance on the barn from both sides. Frenchie tried to make a run for it from the back of the barn before he got surrounded, but the minion he sent to grab a truck was shot down and he found himself in a crossfire between the Mounties and Lumberjack's men. 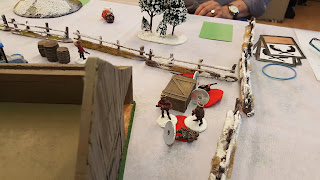 O'Grady's men keep up the hail of lead on Tony, who tries to make a break for it but is cut down. 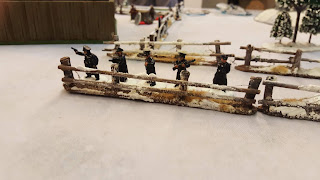 Both one of Sgt Miller's men and one of Lumberjack's minions climb into the cabs of the two trucks and drive them off. Lumberjack's man heads for the edge of the table, but the Mountie just parks up in a safer place and returns to the fight. This decision will have an important effect on the final results! 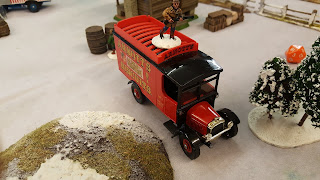 Over by the barn Frenchie and his junior partner are pinned down. They knock Lumberjack off his feet, but with no serious damage, and kill one of his minions, but Frenchie is wounded by a Mountie and finished off by Lumberjack's henchman. 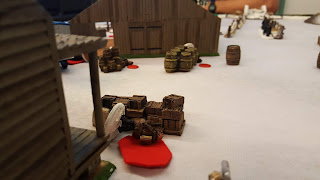 If Bill had left one of his Mounties in that truck he would have gained an extra 8VPs and the other law enforcement players would have been 2VPs less.
Posted by Sun Jester on June 29, 2019