Alan has provided his first thoughts on the Alien vs Predator game.

Henry and I have been talking about doing some sci-fi themed wargaming for a while now, and a couple of months back I picked up a copy of Prodos Games “Alien vs. Predator ; The Hunt Begins” board and miniatures game, the 1st edition, and painted up some of the figures. We got our first opportunity for a game last night, so we played the 1st mission from the rulebook.

AvP: THB comes with 23 resin figures representing human Colonial Marines (5), the XX121 Xenomorphs, better known as the Aliens from that movie genre (15), and the non-human hunters from the “Predator” and ”AvP” movies (3).  The figures are very detailed and on the large size for 28mm, probably closer to 32mm in reality, even without their bases. In the 1st edition, the figures need considerable assembly, and I found a modelling drill useful for securely attaching the Alien’s tails. Although the Alien’s tails and claws look very fragile, I have found them in practice to be very springy, and so far, there have been no casualties.

The game is essentially a skirmish-level representation of a confrontation between these factions aboard a spaceship, although it could just as easily be a planet-based colony, such as Hadley’s Hope from the “Aliens” movie. The game includes a set of tiles which interlock like jigsaw pieces, representing corridors and rooms, and which can be mixed up to create a large number of different layouts. There are also bulkheads and air vents, which represent varying obstructions and methods of access to the different species.

Because it is a board-game, AvP:THB contains everything you need to start playing, although Prodos have also brought out a number of expansion kits, which include among others  Sentry Guns and the Power-Loader from the 2nd movie for the Marines, the Alien face-huggers and warriors, the Alien Queen, several different models of Predator warriors, and commandos loyal to the Weyland-Yutani Corporation (i.e. the “company” from the movies).

The 2nd edition of the game was introduced at Salute back in April, with new figures  and a reprinted rule-set, although the differences we have found are just some typo corrections and rule clarifications. There is now also available a rulebook for converting the whole thing into a tabletop wargame.
Vehicle rules are promised for a future release.

With just two of us, we decided to leave the Predators out of it, so I pitched 5 Colonial Marines against Henry’s 15 Aliens. The game follows an “I Go, You Go” format, with each side activating a model, which gets a couple of Action Points to spend. Actions include obvious things such as moving, shooting, and close combat, and less obvious ones such as opening or locking bulkheads, interacting with objects in a room, etc. Each faction has its own special actions too.
There are environment rules which change from turn to turn, and each faction has its own deck of strategy cards, which provide modified move, shooting and close combat conditions and saving throws, to mix things up a bit. The game also comes with a large number of card counters to denote things such as Wounds, Activated models, etc., which we found very fiddly and quickly replaced with plastic counters.

I have played sci-fi games before where it was easy to get bogged down in the details of the weapons and armour, but AvP plays well - all dice throws are D20’s, and each combat is essentially two throws, the Attacker to hit, and then the Defender to save, so it is fast-paced once you get the stats memorised for your faction.

All figures in the basic set only take 1 Wound, so casualties mount fast, and we found the Aliens getting badly shot up in the first few rounds, not helped by some fairly dismal dice-throwing on Henry’s part. The Marine flame-thrower proved extremely effective, easily accounting for the majority of Alien casualties. However, when the Aliens get into Close Combat, their acid blood proves as nasty as it did in the movies; several Marines succumbed to acid splashes, even as they waxed their attackers.

Overall, the game balance worked fine with just two factions. It is hard to predict what would happen with three – I suspect two against three would always prove overwhelming, but since each faction has separate objectives in all of the standard missions, this is unlikely to be much of a problem.
Also, the Stalker and Juvenile Alien types in the game are the “easy” ones – the Marines would certainly need larger numbers or some more firepower if faced with Alien Warriors or a Queen.
Since this was our first time out, we played the Basic Game rules, but the rulebook also contains an Advanced rule set, which introduce some more complex rules as well as allowing for points-based force creation, and campaign play. 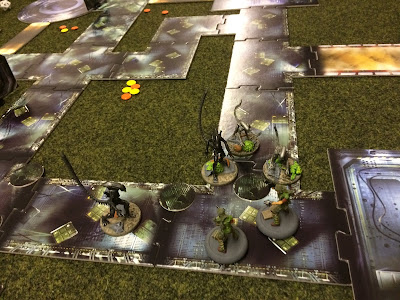 In the picture, you can see that I went with a simple shades-of-green look befitting Marines. The only real departure from the colour scheme portrayed in the movies was to make their combat armour olive green instead of woodland camouflage (why assume  green and brown camouflage would work on an alien planet anyway?).  Apart from being a lot easier to paint, I felt it gave better contrast to the figure overall.

As an experiment, all my Aliens have been based on Daemonscape 30mm resin bases, which give a much weightier feel than the rather flimsy, plain plastic bases supplied with the game.  Although they take a bit of extra work to paint up, I am pleased with the results, and will be using them for all my sci-fi figures from now on.  It’s worth pointing out that the 2nd edition game comes with one-part figures with moulded-on, detailed bases, which do look a lot nicer.
Overall, the game was very enjoyable, and we already have a return match planned, perhaps with some Predators if I can get them painted in time?

Our club Games Day in April 2017 was particularly well attended.
Four of us participated in a re-enactment of the ACW Battle of Cedar Mountain, which occurred on Aug 9th 1862, in northern Virginia.
We used 28mm figures and terrain from a mix of sources, and the Regimental Fire & Fury rules. 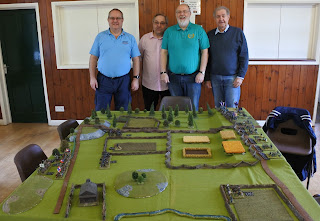 A second game featured a reconstruction of the battle of Arras, May 21st 1940, the famous Allied counter-attack during the Battle of France. Four more of us took part, using 10mm figures and the Blitzkrieg Commander 2 rules. 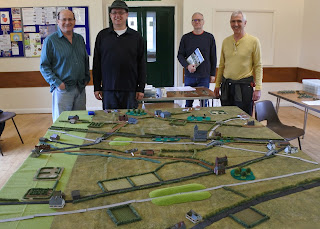 In addition, we had an all-day Warhammer 40K game going on, now becoming a regular feature at the club Open Day. We have the second generation of Tring Club members here, Jon came along with his Dad until his late teens, when he discovered women and beer. Now he's married and settled down, he's become a regular member again. 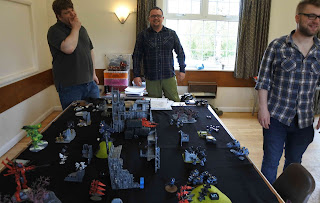 As it turned out, it was a mixed day for reversing the verdicts of history.
At Arras, the British advance originally went well, pushing the Germans back as they had done historically. 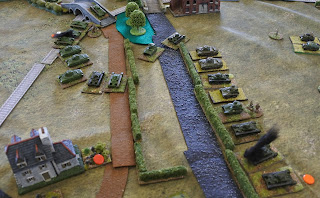 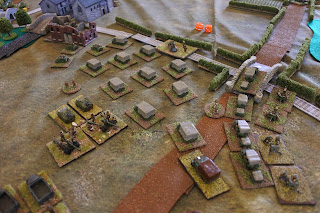 However, the French forces simply refused to move beyond their own start line, and eventually the attack collapsed for lack of reinforcements, as 25th Panzer rolled over the French flank and threatened to cut off the Allied line of communications. Pretty well as actually happened on the day. 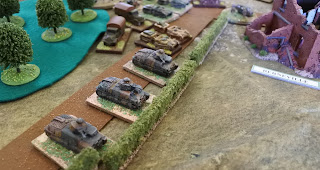 Meanwhile, on Cedar Mountain, Early’s Division was held at bay by stubborn resistance from Federal cavalry under orders to slow Jackson’s advance. 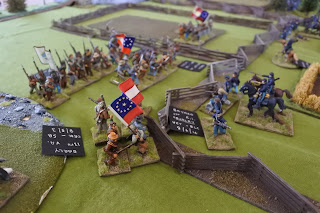 A strong thrust on the Federal right met a Confederate riposte from Garnett’s Divn, but the Northerners eventually prevailed, aided by some of the most consistent dice throwing seen at the club in a long time. 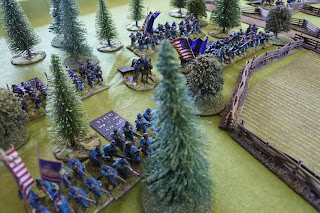 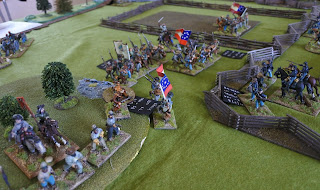 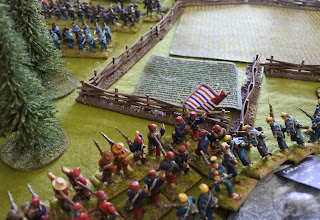 Jackson’s superiority in numbers counted for nought as the Rebels piled up at “The Gate” and were unable to deploy. Eventually a resounding Federal victory was declared at 8pm battle time, some two hours earlier than the historical battle ended. 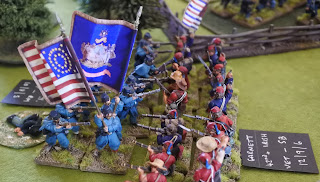 Another introductory game, this time Frostgrave. Colin had played once before, but about a year ago, and wanted to have another try whilst he was waiting for his copy of the rules to arrive. With the plans for a Frostgrave club league later in the year I can see a lot more people wanted to get some practice in over the next few months.

We played two scenarios, Genie in The Bottle and The Living Museum. Colin had a Enchanter and his warband (made up from his historical Vikings) and I used my Necromancer and his dubious followers (all the warband are orcs!). 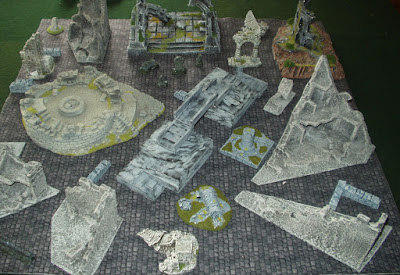 The set up for Genie in The Bottle

Genie in the Bottle was a very one-sided game. Colin cunningly used his Telekinesis to drag a treasure from the open to drop at the feet of his wizard and three followers. Unfortunately, as soon as one of the minions picked up the treasure, POOF!, the genie appeared. I didn't help things by promptly dropping a Fog just behind the genie to make sure that all it ever saw were Colin's men. His wizard spent most of the game running away from the genie whilst it killed his followers. 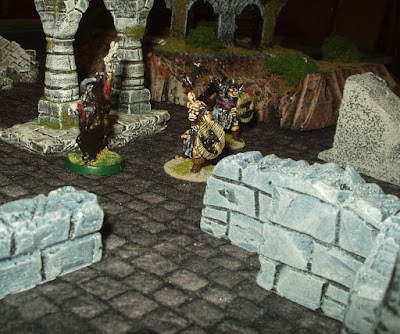 The Necromancer move forward with his bodyguards

This allowed me to gang up on the rest of his warband and cut most of them down, whilst screening his shooters with Fog. I had succeeded in grabbing 5 of the treasures by the end of the game. 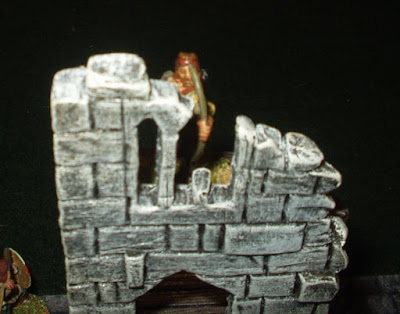 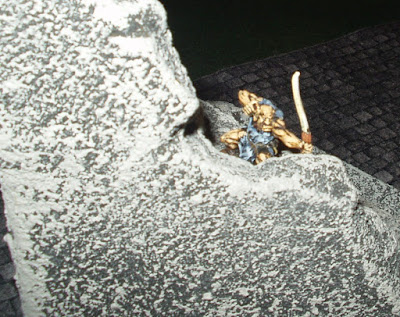 As does an orc!

The Living Museum, was a much closer game. Colin also had the Fog spell, and having witnessed my use of it in the first, game, used it with abandon. With both sides dropping Fog all over the place our shooters were mainly redundant and it was a close combat, hack-and-bash game. We had both got a shooter into a high vantage point, but with all the Fog drifting around all they could see was each other, so spent the game shooting at their opposite number without much effect. 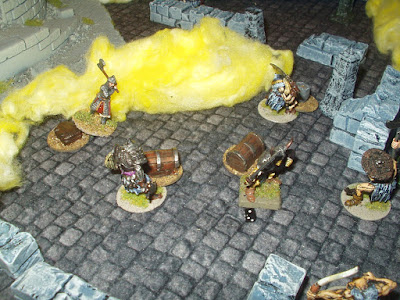 Eventually, in frustration, Colin's apprentice climbed up onto a wall where he could see my sniper and Pushed him off of his perch. Fortunately his fall was less that 4", so he was unhurt. It was a brave act, but one I took advantage of by having my Necromancer stick a Bone Dart in the apprentice's eye. 19 points of damage against an armour of 10, but as the apprentice had already burnt his fingers failing to cast a previous spell, that was enough to kill him outright! 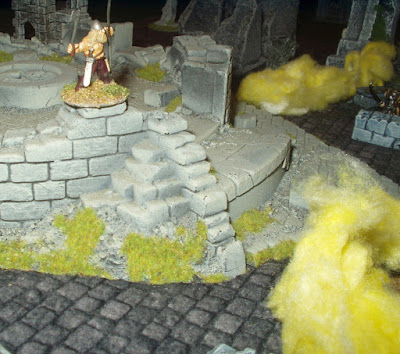 First Time with The Men Who Would Be Kings

I ran an introductory evening of Osprey's Colonial Rules, "The Men Who Would Be Kings" last Friday. Here is Bill's impression of his first game.

On Friday the 21st of April I played my first game of “The Men Who Would Be Kings”. Thinking out of the box Graham put together a great scenario, which was a lot of fun to play. It was based on an American / Canadian cross border conflict, complete with a winter landscape, in the 1920’s, which was great fun. Like most of the rule sets which are produced by Osprey, TMWWBK are quick to learn and are very playable. We were able to get two games in the evening, playing each side in turn.
Thanks again Graham for a couple of great games
Bill

The table with 4 objective markers along the stream. 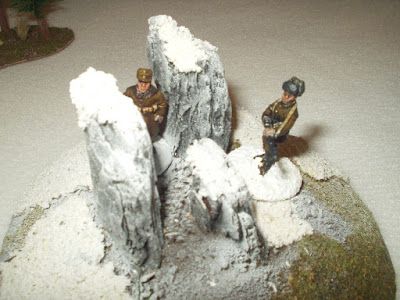 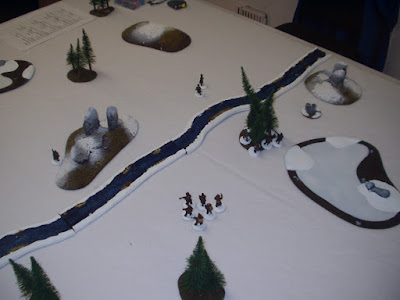 The situation at the end of the first game - not many Canadians left on the table!
Posted by Sun Jester on May 01, 2017 No comments: