Another outing for my VSF variant of Sellswords and Spellslingers at the club. This time, for a change from the Dark Continent, the gallant chaps (and chapess) in service of her Imperial Majesty were off to the chaos of the Balkans, on the fringes of the Ottoman Empire.

Henry and Colin played the Player Characters and I acted as umpire and ran the villains. This is not strictly necessary in Sellswords as the foes are controlled by the events cards, but as I had written the adventure scenarios (one was based on The Healer scenario in the book and the other was my own creation) I thought it fairer if I didn't play. And as I know the rules best, it helps move the action along as well.

You have been sent to retrieve Professor Simple-Smyth, a scientist whose research into lighter than air technology is of great interest to Her Imperial Majesty’s government. Unfortunately, the good professor has become something of a recluse and is hidden away somewhere in the Balkans. A government agent had made contact with the professor are persuaded him to travel to Britain, your group has been despatched to bring the professor home.

Your first task is to meet with the government agent, who will give you final details of the professors current location. To prevent foreign powers from getting their hands on the professor, the mission is of utmost secrecy and the meeting will take place in a remote mountain village.

But word has obviously got out as a number of local bandits have been seem searching the mountain villages for the “foreign spy”. It is not known if they are working for themselves or in the employ of some other power.

Set up, a village small houses with various out buildings, paddocks and gardens etc. There are a number of villagers present (2 per PC) and one of them is the disguised agent. To locate the agent a PC must more within 2” of a villager and spend one action to give the password. Roll 1d6:
1-4 – Bemused local who wanders off muttering.
5- Disguised Bandit who will charge the PC (treat as ambush)
6 – The Government Agent
If he hasn’t been found the last villager will automatically be the agent.

Deployment
Place the PCs within 2” of the Southern table edge

Complication
The Bandit Chieftain arrives on a random table edge.

Traps
There are no traps.

Animals
Animals are randomly deployed on the map. They activate, 3” respectively, every time a PC or foe moves within 1” of them, or every time the Monster Frenzy card is drawn. They move in a random direction.


The farm animals do not cause any damage, but any PCs or monsters contacted by them will be confused and lose their next action. In other words, move the group in contact with the figure. When that figure is activated, the first action received by that figure is used to push away the animals (move the group 2” away from the figure). In addition, any figure in contact with the animals loses the advantage of the Stealth trait, if any. 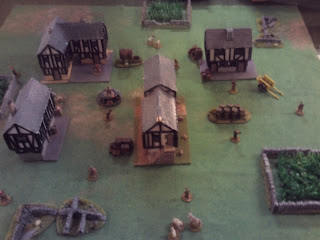 The table layout, the PCs will enter from the two top corners. 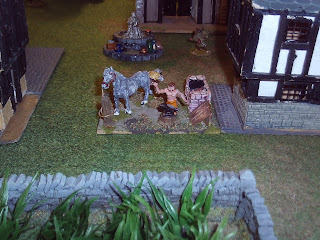 The village blacksmith working away! 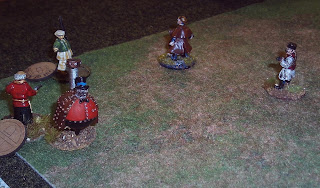 A bad start for Colin's party, rolling 1's when shooting with two of his PC's, managing to jam their guns (obviously due to poor firearm maintenance). 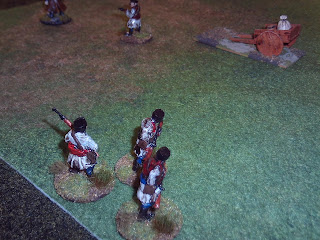 Not a good time for another bunch of brigands to show! 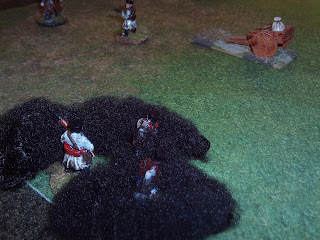 Fortunately his scientist managed to prime and lob a gas pot at their feet, knocking them out. 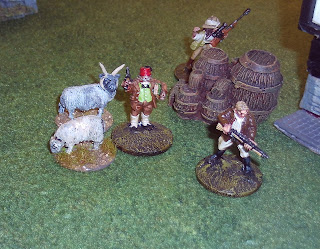 Henry's party got closer to the village but his scientist managed to attract the attention of some sheep (lose an activation shooing them away). 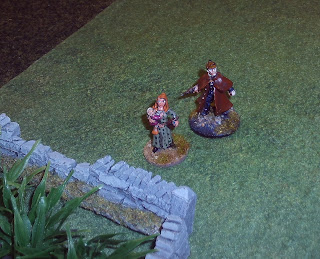 Colin's gentleman adventurer attempts contact with one of the villagers to see if it is the agent in disguise, unfortunately his pronunciation was so abysmal that the the resulting misunderstanding earned him a slap around the face! 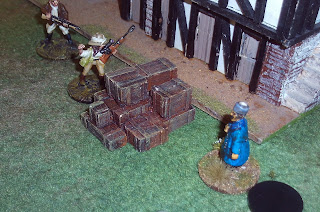 As the brigand leader closes in on Henry's party, his hunter (huntress?) puts a bullet in his shoulder (the black marker represents a wound). 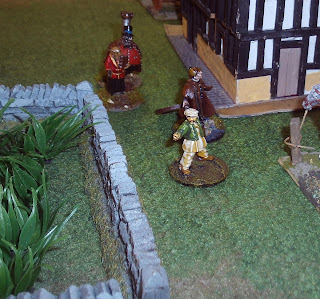 Colin's party get closer to the village. 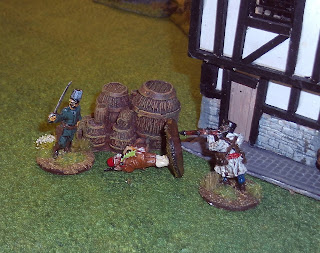 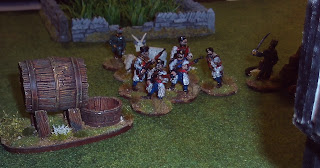 That's a lot of brigands gathering at the edge of the village. 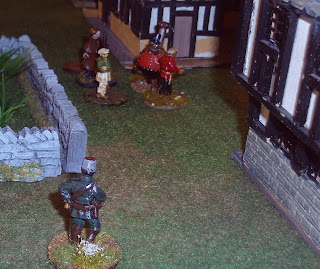 One of the stronger thugs takes a pot shot at Colin, dropping the soldier of fortune. 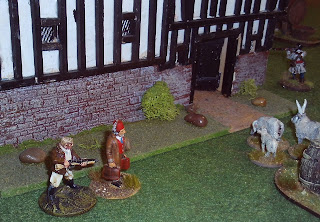 Scarcely an overwhelming success however, as they had lost 3 PCs in this adventure. By using his steam automaton Colin managed to drag both his fallen PCs off (they both survived), but Henry was forced to leave his casualty behind.

Having learnt the location of Professor Simple-Smyth, the party has set off to the secret location, hidden in the nearby hills. But a gang of local Bandits are also on the trail of the good professor. It is not known if they are working for themselves or in the employ of some other power, but you must rescue the professor before the bandits can kidnap him.

Set Up: Place the professor’s house at the centre of the table. Scatter obstacles (large rocks, bushes) around the house.

Foes: There are 3 Bandits per player, plus a Bandit Thug per player+1. 3 Bandits must be deployed as a horde. If there is a single player, there will be only 1 Thug and a horde of 3 Bandits.

Deployment: The Bandits are deployed in random locations, but not closer than 8” to the hut. The professor is hiding in his house. PCs are deployed on any table edge, AFTER all Bandits have been deployed, but at least 4” from any Bandit.

Bandits: The Bandits will use their actions to move in contact with the house, and try to bash down one of its doors (roll a d20, on a 15+ the door is smashed) unless there is a PC within 4” of the Bandit (in that case, the Bandit charges the PC).
Once inside the hut, a random PC will control the professor. Bandits will try to capture the professor and drag him off the table to an unknown fate. The professor is armed only with a club, has 2 hp and 3 levels in the Scientist and Healer traits.

Complication
The Bandit Chieftain arrives on a random table edge.

Traps
There are no traps.

Scenario event: A fire starts in the professor’s house. Treat it as a stationary foe with DL 10, 3 hp, DMG 1 that will attack every person in the house until it is “killed”.


Figures inside the house at the end of their activation take 1 Damage unless they pass a DL 8 Constitution roll. 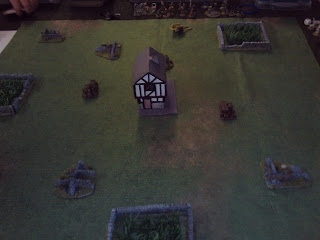 The setting for the second adventure. 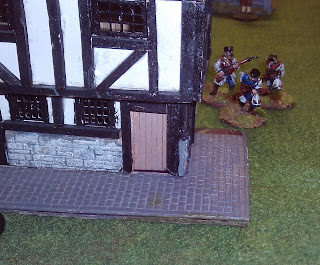 With a head start on the party, brigands rush towards the professor's house. 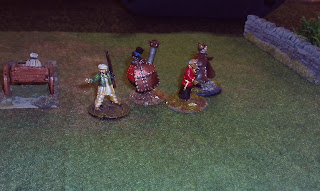 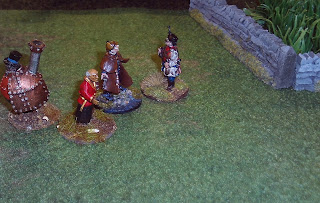 Only to be ambushed by a brigand lurking in the nearby field of crops. 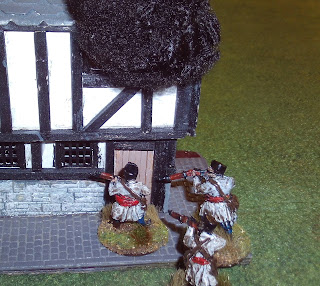 As the brigands break down the professor's door a fire breaks out upstairs (one of his experiments going wrong?). The brigands rush in and overpower the professor, but two of them die in the flames before they can drag him out of the building. 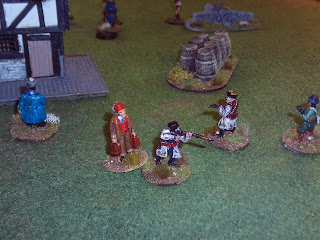 More brigands rush forward as the professor is dragged away to an uncertain fate. In the next activation Henry's hunter (her legs are just visible at the top of the picture) takes a long range shot and blows the head off the brigand holding on to the professor. 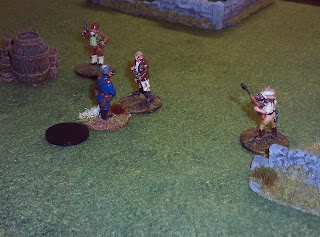 The soldier of fortune fights a very drawn out melee with a brigand thug (the PC was hit at least 6 times in this fight, but manged to make his parry roll everytime!). 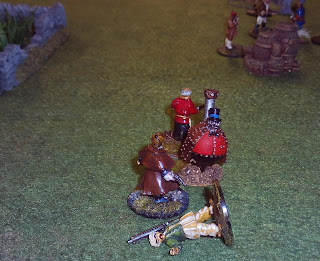 Colin's soldier of fortune is felled by brigands' shooting. The party paused for the scientist to try and revive him, discovering it was only a flesh wound once he recovered consciousness. 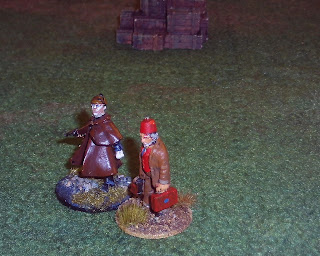 Whilst the other PCs engage the brigands, Henry's gentleman adventurer fights his way past them and reaches to dazed professor, escorting him to safety. 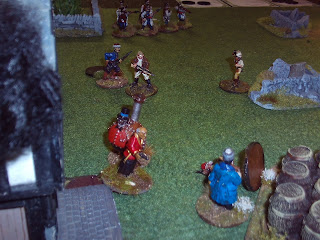 Keeping the foe at bay! 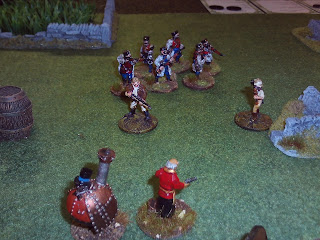 A large group of brigands sneak up behind Henry's PCs. 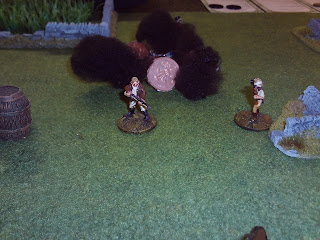 But Colin's scientist lobs a gas bomb in the middle of them before beating a hasty retreat. With the professor now safely off the table, the heroes withdrew at this point without further loss.

A much happier ending for the loyal servants of Her Majesty. The difference between the two games was stark. In the first adventure they operated as two separate parties, in the second adventure they co-operated. The results speak for themselves!