At the last Tring Club Games Day I organised a 4-player Wars of the Roses game, using Sword and Spear. Each player controlled a 400 point army, so Lancastrians, Mark and Ian R, faced of against the Yorkists, Ian H and myself. At one point we were considering making a club rule that everyone should be known as Ian, because we had 5 Ians on the membership list and it would make it easier for new members to remember names.

Ian R faced off against me on the Western side of the battlefield and Mark squared up to Ian H on the East. The Lancastrian forces were slightly balanced in favour of their heavy infantry, so would have the advantage in melee. I'd gone for a more shooty option with the Yorkists, which gave us more manoeuvrebility and an advantage if we could keep them at a distance.

I won the scouting phase and had the advantage of deploying my units last. Ian H and Mark when for a fairly traditional approach and squared off against each other. Ian R massed his heavy infantry on his left flank (towards the centre of the table) with a pike block on the end of the line, bridging the gap between his command and Marks. Given how slowly heavy infantry move and how difficult it would be to manoeuvre the pike block, I deployed with a refused flank of my billmen facing his heavies, hoping to out-shoot his longbowmen and get around the heavy infantry's flank before they could close with mine. Just for good measure I stuck my dismounted men-at-arms in the middle of my bowmen with the idea that they would make short work of any bowmen they got into contact with. Unfortunately t'other Ian didn't realise what I was doing and, probably worried by what seemed to be a gap in our lines, moved troops across to fill it - but more of that later. 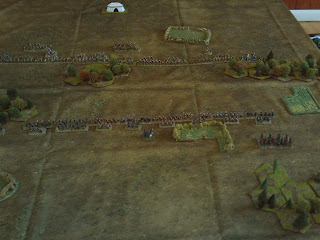 The Eastern side of the battlefield. 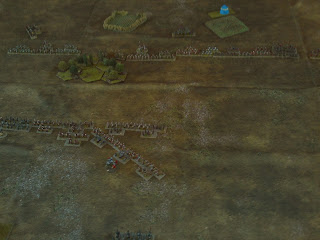 And the Western side. 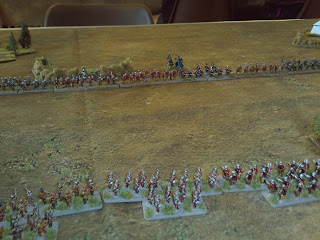 A view from the Lancastrian side of the table.

In the opening move my idea of using longbows to take the enemy out at a distance was demonstrated, but not in the way I had intended. With first shot of the game (and some outstanding bad dice on my part) Ian wiped out one of my militia longbow units with a single volley!

The rest of the first turn passed unexceptionally. None got outstanding activation dice, so everyone edged a few units forward and did the odd bit of shooting. Ian advanced his crossbow and a militia longbow unit into the wood in the centre of our positions, so I threw my Irish kerns in after them but all they achieved was take a hit themselves. I moved my handgunners in to the wood to support them, unfortunately I forgot that the handgunners cannot move and fire, so they just stopped in front of the crossbowmen, frantically trying to relight their matches. Sadly Ian got to activate his men before me in the next turn and blew them away! Over on the Eastern flank the two sides carried on battering away at each other. In the meantime the pike block started it's slow advance across the table. 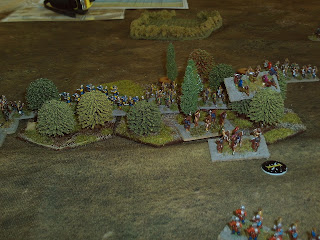 Irish in the wood, where did those Flemish handgunners go? 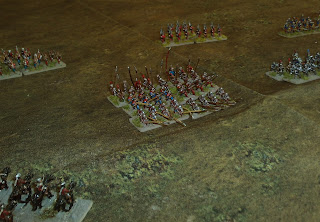 The pikemen crawl across the table (notice the border horse in the corner of the picture, they ain't on the same side!). 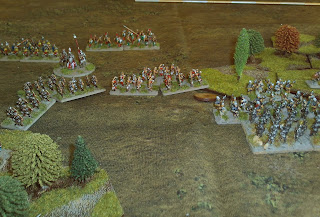 Things get nasty on the Eastern side of the battlefield.

By now Mark had got most of his heavy infantry into contact, but they were not having the desired effect. It was looking pretty even on the Eastern flank, both sides had lost a couple of units, but Mark had several militia units close to breaking due to the shooting casualties they had taken as they crossed the gap between the armies.

Back on my side of the game, my longbow superiority was starting to tell when I had an amazing stroke of luck. Ian was using his general to frantically rally units I'd shot up before they broke, when I routed the unit he was attached to. Ian rolled a 6, HE'S A DEAD UN!
Morale checks for the dead general, plus an army test for reaching 1/3 casualties were mostly successful, at least for the units that were already engaged.
It would be a huge headache to try and control his force with the reduced command radius his captain had. Most of his army would be out of command, he could either try to shore up his scattered bowmen, or else concentrate on his heavies, getting them into contact whilst he still could. He chose the latter, starting to move units across to face mine and edging his pike closer to the end of Ian H's line. 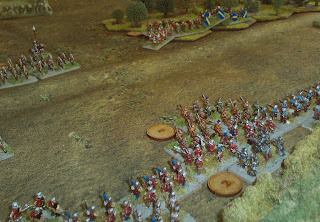 Lancastrians batter at the Yorkist line. 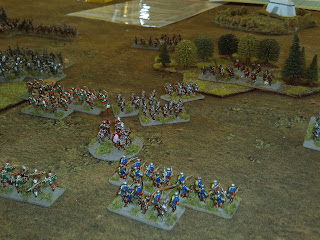 A view from the Lancastrian East flank.

By now my guys were on a roll and Ian R's troops dropping like flies, I just needed one more unit destroyed to reach is army break point. He charged his pike into a unit of Ian H's archers, who gave them a bloody nose, then Ian charged them in the flank with his border horse. Even light cavalry charging with lances has a punch and the dice gods were obviously favouring York this day, because in no time the pike had taken 5 hits and were just one away from breaking (and routing Ian's command). At this point Mark took the opportunity to open his mouth and boldly stick his foot in it. He turn towards his fellow commander and said, "I think you have lost this battle for me!". Oh dear, oh dear, oh dear...!
A minute or so later, one of Mark's bill units routed, taking him over 1/3 losses and requiring a morale check for all his units. His dice rolling was average, about half his units passed and half failed. Unfortunately, all those that passed were at full strength and all those who failed were the ones that had already been shot up, so 3 or 4 further units routed in sympathy with the unfortunate billmen. In a single combat Mark had gone from just under 1/3 losses to over 50% and his command broke!
How we laughed.....

Checking the rules, it seemed that, in a multi player game, we should combine the two commands for calculating the army's break point, so as Ian R hadn't quite reached the 50% loss point, we could fight on. However in the next turn the pike routed and wiped out Ian's border horse, taking their combined losses well over 50%. An outstanding Yorkist victory!
Most of us were fairly new to Sword and Spear and we were all happy with how the game played out. We realised that we had got a couple of minor things wrong, but for the most part we had stuck to the rules. I think we will be playing these rules more often and I need to dig out my 10mm Late Romas and Sassanids to give them an outing. 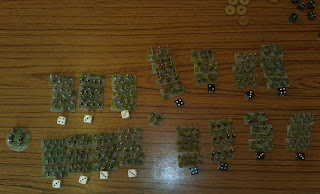 Just to rub it in, the Lancastrian losses (the pike block hadn't been added to the pile yet at this point!). 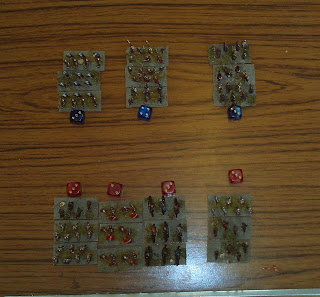 And the Yorkist losses!


There were two other games going on at the Games Day. 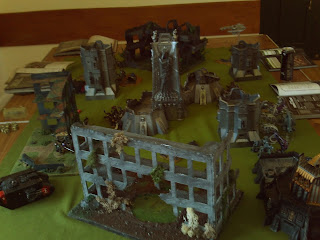 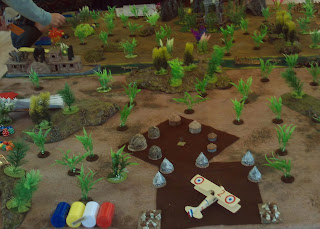