We played some more TMWWBK games at club last Friday, four players using half size units we managed to get three games into about three and a half hours gaming time.

All three games pitted Terrible Turks against Dastardly Huns arguing over who had the right to oppress the local population. As we had two new players the first game was a straight up "Kill 'em All" game, them we played "Get Off My Land" and "Run To The Hills" scenarios from the book. 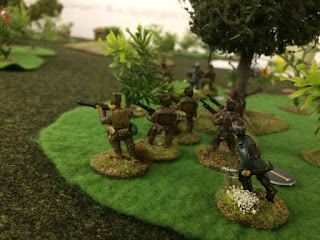 Turkish infantry shelter in the jungle 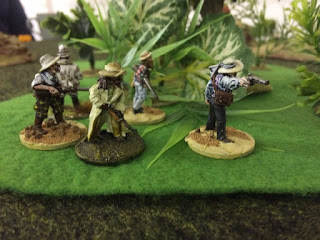 Email ThisBlogThis!Share to TwitterShare to FacebookShare to Pinterest
Labels: Battle Report, Colonial, The Men Who Would Be Kings

At our Games Day on 26th November 2016,  We put on a large Rapid Fire game set in Normandy.

D-Day +2, 8th June 1944
After landing at Juno Beach the Canadians 3rd Division moved inland towards its objective of Capriquet Airfield. Whist moving forward and occupying the villages of Bretteville and Putot the Canadians were attacked by the recently arrived 12th SS Panzer Division. The game was based on the fighting that took place on the 8th of June.

The Germans were played by Mark and Colin. The Canadians by Henry and Graham. Ian Willer umpired.

The Recce Battalion attacked Norrey and destroyed the two Companies defending the village. However the Canadian artillery and Mortars weakened the Recce unit. 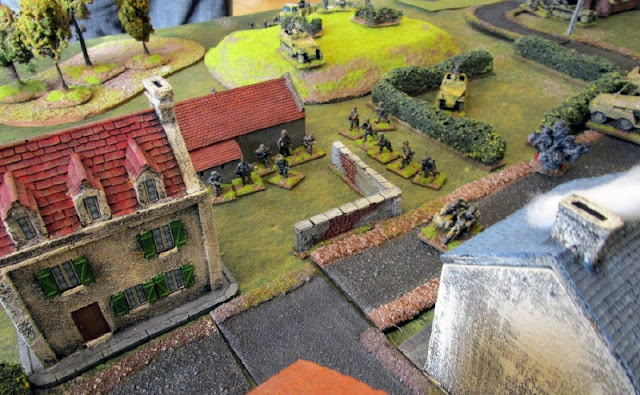 Read the rest of this Post »
Posted by Colin's Wargaming Stuff on December 10, 2016 No comments: