A chance to try our my house rules for Cruel Seas at club this week. A German convoy commanded by Mark, escorted by 3 little Kriegfischkutters, is jumped by two groups of British MTBs (Henry and myself). Help is at hand for the convoy, a Type 24 torpedo boat is steaming up and, as they are close to shore, there is a possibility for air support turning up. 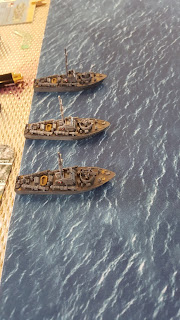 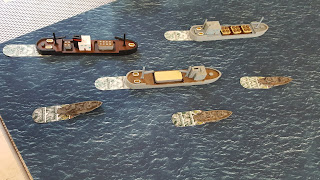 Two Mark IIs launch their forward tubes whilst the third breaks off. 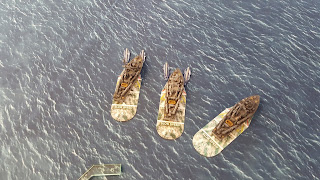 The convoy move forward into the torpedoes path and a Kriegfischkutter peels off to engage Henry's Vosper Mark Is which are trying to flank them. 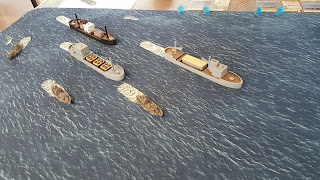 Now in front of the convoy the third Mark II launches his first fish. 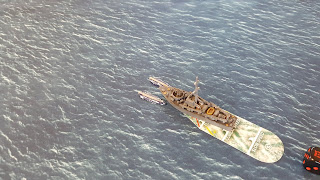 From the British captain's point of view. 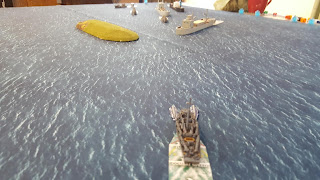 At the end of the turn Mark (the German player) rolled for availability of air support and got a 1, success, an aircraft would enter the table in the next turn. Rolling again for what aircraft was available and he got a JU87 Stuka, which he promptly used to dive bomb the Vosper Mark IIs. All three boats were within 20cm of the Stuka so threw up a barrage of flak. 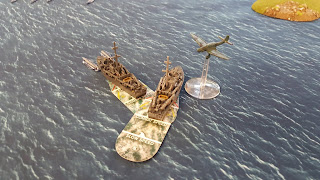 A lucky hit with a twin 20mm and I rolled three 6's for damage, BOOM! the plane nose dived into the sea just in front of the Vosper. 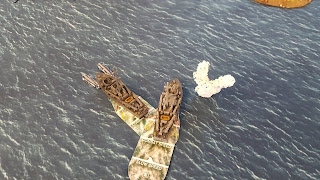 Enter the cavalry, the Type 24 Torpedo Boat to the rescue, but it's first salvo missed! 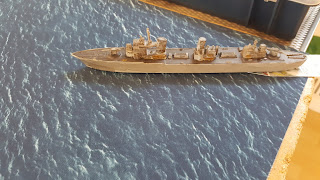 My first torpedo finds it's target.... 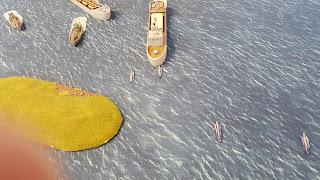 ....BOOM! The damage wasn't enough to sink the merchant, but I scored 3 critical hits using our new rules. I got a double engine hit (taking it to 1/3 speed), additional structural damage and then a Crippled result. This meant another engine hit (so the ship couldn't move), a rudder hit (random direction if  she could have moved) and taking on water (extra 3d6 damage every turn). This last was enough to sent the ship to the bottom, but rolling a 6 meant that the wreckage would remain in place for 3 turns. 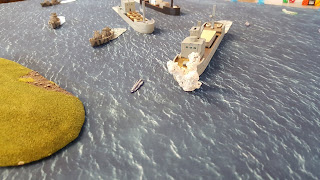 Coming round the other side of the island, one of the Mark I's looks like it's torpedoes are on target. 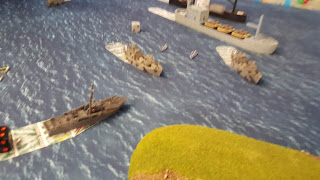 A bit of frantic manoeuvring by the German ships lets the merchant avoid the torps, but one catches the tanker.....it's a dud! 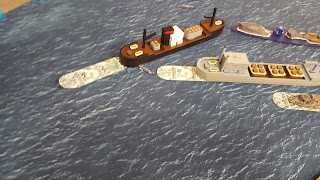 But avoiding Henry's torpedoes and missing ramming the sinking ship put the merchant in the path of one of my torpedoes, and it was a BOOM! 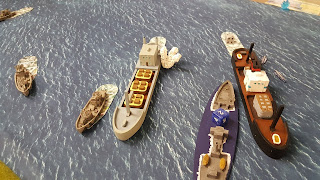 Looking good for the British, we had lost two MTBs (one of Henry's Mark I's went down to a crossfire from the three Kriegfishkutters) but sunk the two merchants and I had a boat with two torpedoes left lining up on it. But at this point the Type 24 sank that MTBs with a direct hit from a 4" gun. 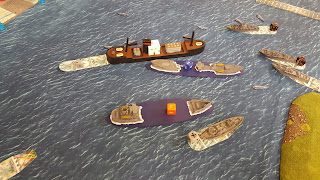 There were still a lot of fish in the water, including two that Henry had chucked in the direction of the |Type 24 to try and put it off. Another torpedo hit the tanker, but failed to go off and another of Henry's boats went down. We decided to call it a day and head for home, both my surviving boats got off the table but Henry's last boat was riddled by the Type 24 and finished off by a Kriegfischkutter (with a 35mm and a twin or quad 20mm these little boats have quite a punch!). 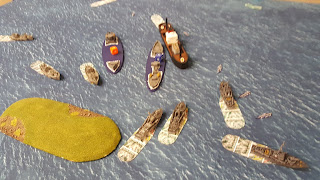 The final insult and luckiest move of the game, was when Mark somehow managed to turn the Type 24 in between the two torpedoes coming at it! We had to check twice with laser pointers to be sure, but somehow he'd managed it. 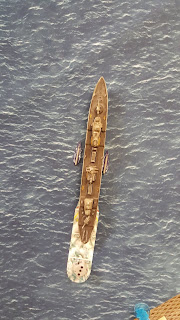 We called it a draw, two merchants for 4 Vospers wasn't a good exchange. We had all had a lot of fun and laughs and agreed that the new torpedo rules worked mush better (when they hit). Henry had really bad luck with his fish, all three that had lined up with a target had either missed or was a dud!

Other games on that night;

A 40K game with the Space marines fielding an impressive bit of kit. 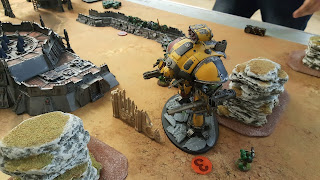 And a 4-player Chain of Command game set in Burma. 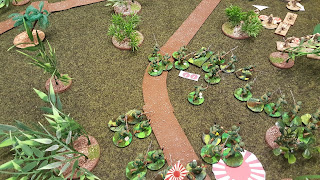 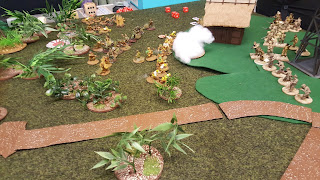