An alternative view of the action!

The Kidnap of the Bank Manager in Grahamtown

This game was played on 21 July 2017, using Graham’s scenario and his homebuilt rules.
A few pictures depict the action:- 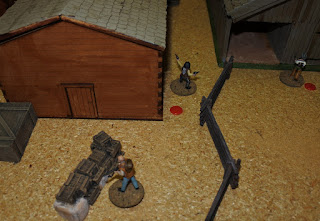 Mark and Alan were both running Mexican bandido gangs, but in a spirit of total lack of cooperation, they quickly started a duel which lasted the entire battle and spelt doom for both sides. Here, Alan’s gang are headed by Vittorio in the centre and Esmeralda, his sidekick; both Vittorio and Esmeralda already have wound markers, and only Esmeralda will survive the battle.  Meanwhile, the henchman Il Brutto fends off a long range attack from Colin’s faction of armed hookers.  Colin’s shooting was phenomenal throughout; his faction accounted for no less than four of Alan’s alone, and also succeeded in holding off both Graham and Bill. 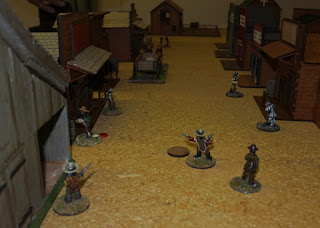 Mark’s bandidos duel with Alan’s, from the other end of the alleys off Main St.  At this point in the fight, Mark’s gang boss has run out into the middle of the street to get a clear shot at Esmeralda, and then fumbled his weapon. Unsurprisingly, Esmeralda took exception to this behaviour, and promptly shot him down. 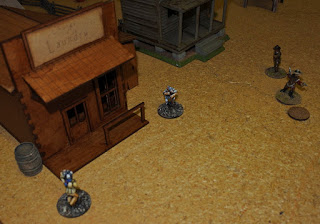 Another view of Mark’s gang boss, standing alone in Main St outside the Chinese laundry. This end of Main St itself saw very little action until late in the battle;  Mark and Alan’s bandidos were busy duelling in the alleyways on one side, and Mark and Bill on the other. 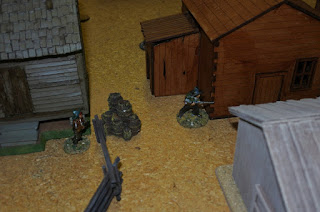 Here you can see one of Mark’s minions attempting to sneak into a firing position against Bill’s faction. 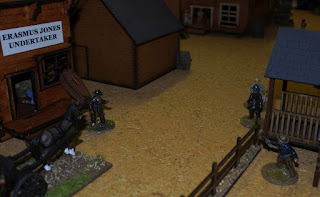 Meanwhile, at the other end of town, Bill and Graham’s gangs are shooting it out across the side street, near the undertaker’s. 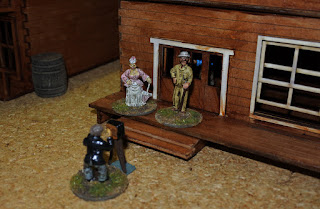 Colin and Bill’s gangs also got into a fire-fight across Main St, by the hotel. Almost incredibly, a couple continued to pose for a portrait photo throughout the battle, despite the bullets whistling by their ears. You can just see one of Colin’s gang in the hotel doorway, using the couple as human shields. 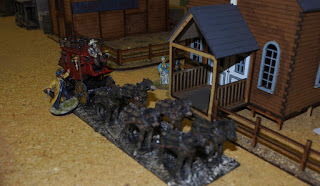 At last the stage arrived, bringing the banker into town. By this time, there weren’t many left of each faction to do much about it. Bill’s gang got the drop on Colin and Graham though, and almost the only figure still standing managed to hold up the stage driver and “persuade” him to drive off the table, for a convincing win.

We played a 5-player shootout at club last week using my homemade rules. The scenario was that a rich banker was due in town on the noon stage and the local bad-boys have decided to kidnap him. They ride into town just before the stage is due, only to discover 4 other gangs have had the same idea. The object is to get control of the stage when it arrives (randomly rolled for after each turn after the third. Unfortunately, no-one knew whether the stage would stop at the hotel first, or one of the livery stables at either end of town. Once the stage was on the table, we would roll to see where it stopped, 1-5 and 16-20 for the respective livery stables and 6-15 for the hotel.

It was a bit of a bloodbath, everyone started off with a gang of 6 and by the time the stage arrived (turn 5) most of us were down to 1 or 2 men left! Colin's shooting was phenomenal, I think he only missed 3 shooting rolls the whole game.

A couple of high points, one of Colin's men jumping onto the back of the moving stage, in best Hollywood tradition, only to be shot off by Bill's last surviving gunman before he could make the driver stop. Then Mark's Mexican gang leader rolling a 20 (jammed gun!) whilst standing in the open, then being shot by Alan to the comment of "What do you expect, standing in the middle of the street fumbling with your weapon!" Cue schoolboy giggles all round.

In the end, the stage stopped by the first livery stable, Bill shot my last gunman as he ran for the stage, used a wild card (everyone got three one-off event cards to use) to frighten the horses so that they moved down a side street, out of view of the other players. He then jumped on the stage, stuck his gun in the drivers face and made him take the stage off the table with the startled banker still inside. 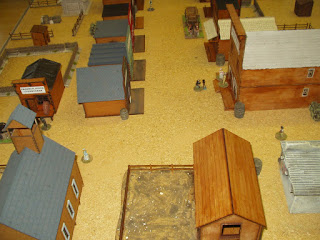 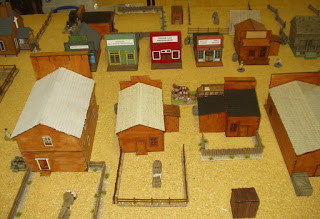 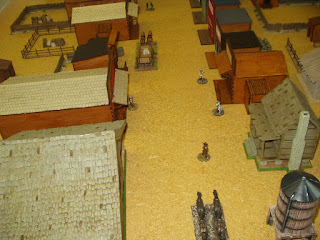 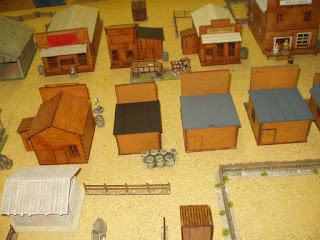 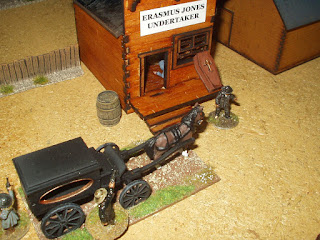 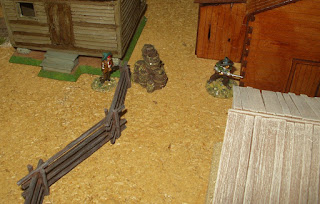 I'll add some more pictures when I get some close ups from Alan.

Also being played at the club that night were 5 other games. 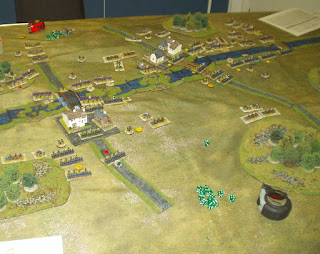 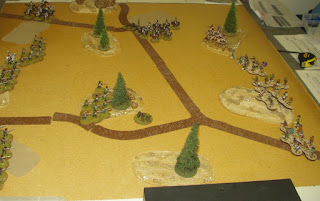 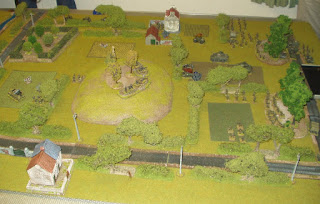 There was also a Warhammer 40K game, but when I got home I realised I hadn't taken a picture of that!
Posted by Sun Jester on July 24, 2017 3 comments:

Played our first couple of games with En Garde, the swashbuckling rules from Osprey. I'd had a copy for some time, but other things kept getting the way of trying them (Frostgrave, The Men Wh0 Would Be Kings, The Pikeman's lament etc)For the first try we kept it simple, 100 points each of Border Reivers with no attributes other than Commander. We also didn't bother with a scenario, just a simple "two gangs come into town and kill each other" set up. The purpose was to get the hang of the rules. 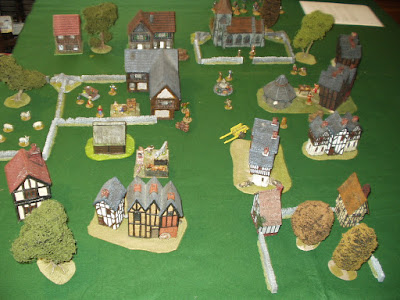 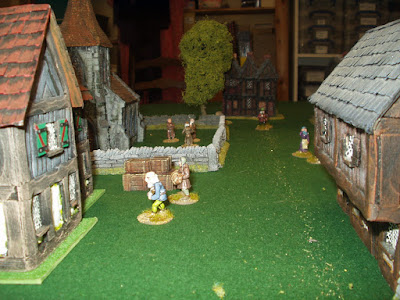 The villagers go about their business 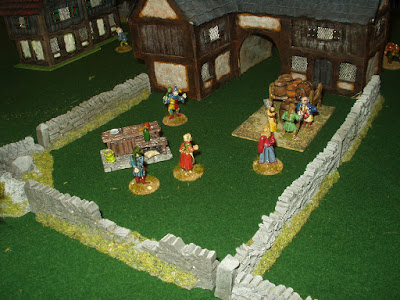 Or relax over a pint outside the tavern 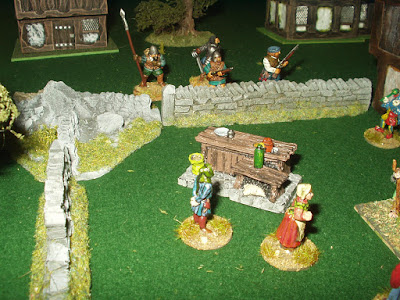 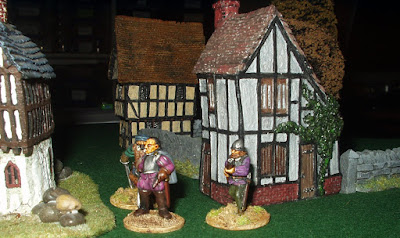 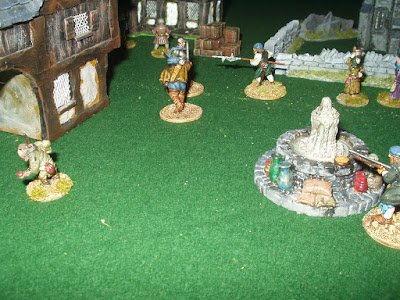 Fighting in the village square 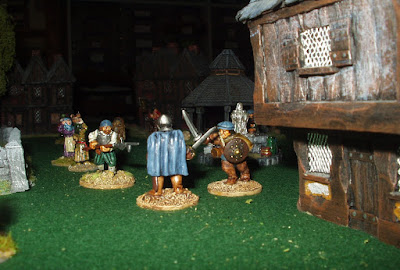 Get yourselves oot the tavern! 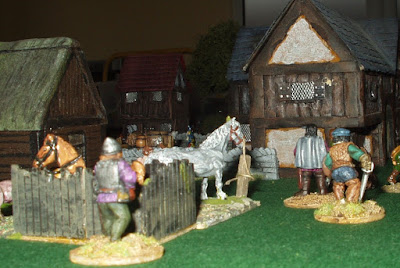 Trying to sneak up on the Scots

We played two games, which both worked well. As with any rules, the first games a a steep learning curve. Most of the rules made sense, although we realised we had missed things in the first game (as usual!) The close combat was a bit clunky in the first game, but much smoother the second time around.

We may well produce our own QRS, as we felt there were various things missing, which we found we would have needed. For example the QRS tells you that a matchlock is Inaccurate but nothing on the QRS explains that effect. In fact there is nothing in the shooting section in the rulebook that explains Inaccurate, we eventually found it in the weapons section. Minor issues, and after a few games we won't need to look it up. But we really did enjoy the games, so much so that Henry is off to buy his own copy of the rules. I've also ordered a 3x3 gaming mat to improve the look!

Next time we will try attributes and scenarios.
Posted by Sun Jester on July 01, 2017 3 comments: