We had a great 1914 game at the last Tring Club Games Day, a single platoon of Belgians attempted to defend a village against three attacking German platoons. We played the game using the "Big" version of Chain of Command. I have also used CoC for the 1912 Balkans War and have been very impressed as the rules easily adapt for the earlier periods. The more rigid command structures and larger sub-units make it quite a different game to playing the rules for WW2.

It gave us an opportunity to use Henry's newly-finished, scratch built, Victorian brick buildings. Unfortunately I haven't got any interior shots of these, as he has really gone to town on them. The upper floors and roofs are removable and the interiors decorated and furnished with beds, tables, chairs and bar/shop counters etc. The buildings are intended for playing Frostgrave, but on a "Ripper Street" theme. However it's good to make use of them however we can.

Henry had the camera and was the Belgian player, so the pictures are mostly from his side of the table. 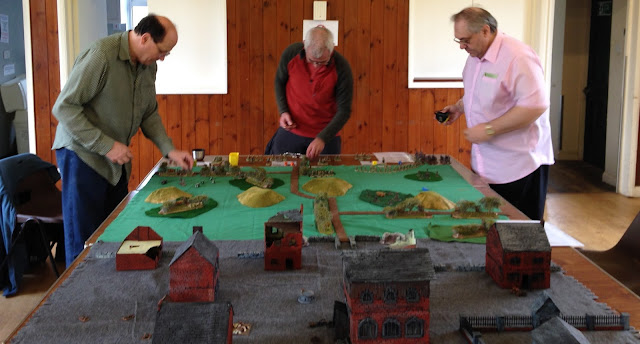 The German players assemble their hordes of dastardly Huns. 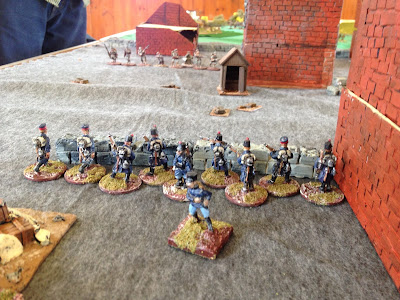 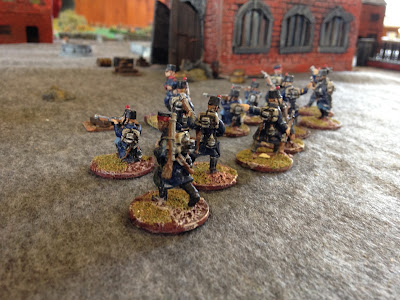 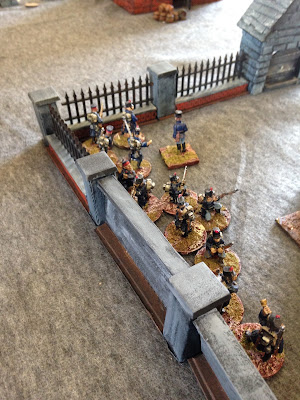 The graveyard is turned into a strong-point. 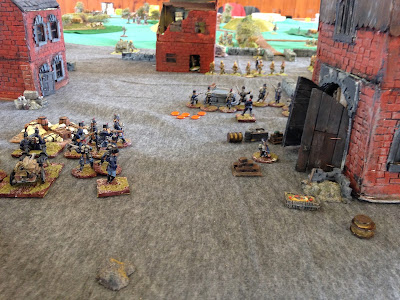 A dogcart machine gun deploys. The forward unit of Belgians are taking casualties in a crossfire between the advancing Germans and a platoon in the house at the left of the picture.

The game was an eventual victory for the Germans after a bayonet charge dislodged the last defenders from the house they had occupied. It was a great game and much fun was had by all the players.

Also in the hall was a large Warhammer 40K game (apparently the red cloth was not significant, someone had forgotten to bring the other black cloth!). 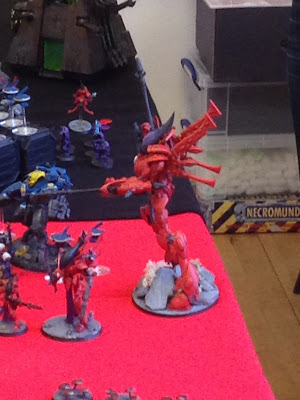 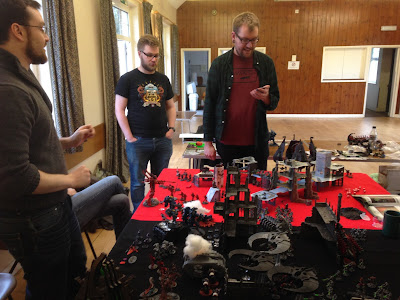 Bill has a load of Romans, but so far no opposition. So we split his Roman forces into Red and Blue for a civil war battle.

We played the game diagonally across the table. 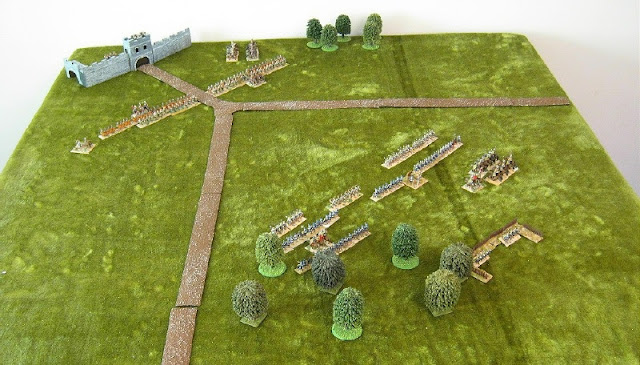 The Red forces are deployed outside the fort in the corner ready to defend it against the attacking Blue forces. 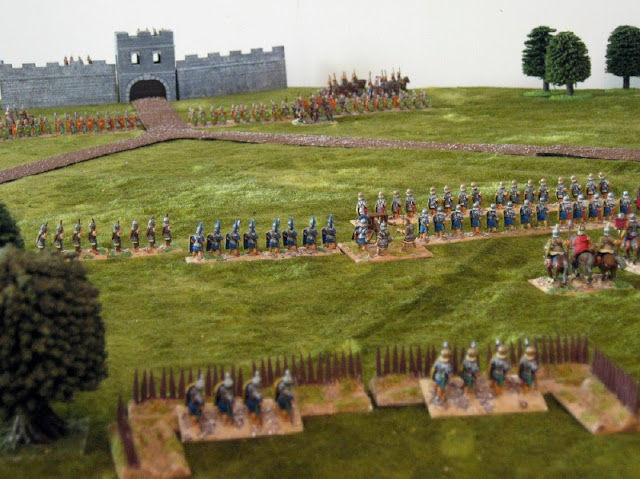 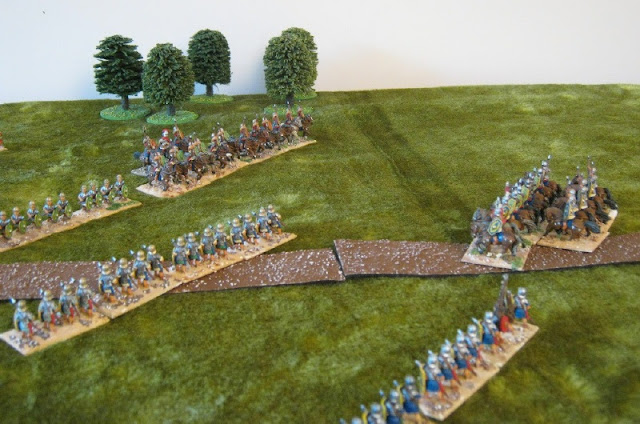 As a result the first combat was between one unit of Blue cavalry and two units of Red cavalry which the Reds won. 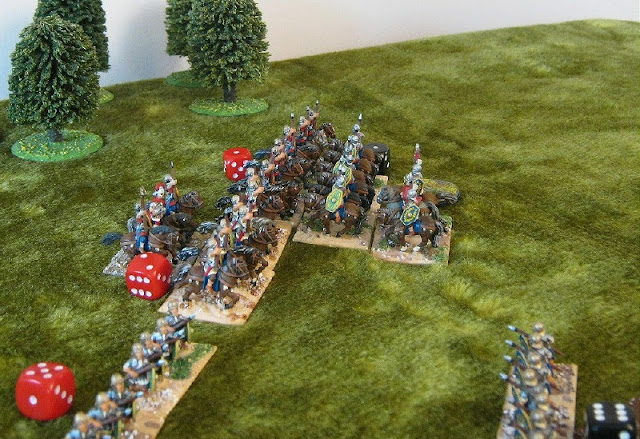 Auxiliary infantry met in combat. At the same time the Red cavalry hit the second unit of Blue cavalry and soon routed them. 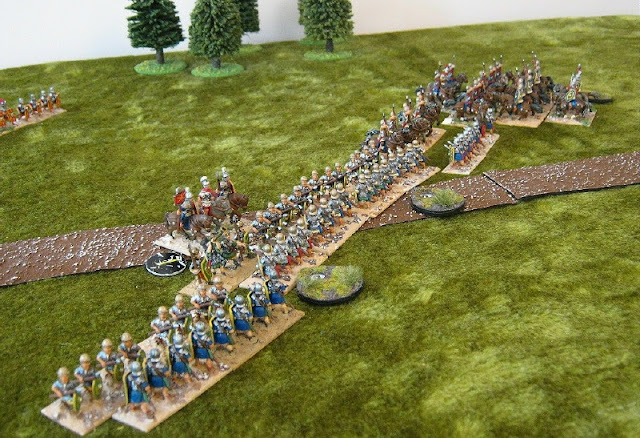 One unit of Red cavalry broke through and threatened the flank of the Blue advance.

Blue Legionaries managed to turn to meet the cavalry on their flank and it all got a bit hectic in the centre with Red forces approaching on two sides.. 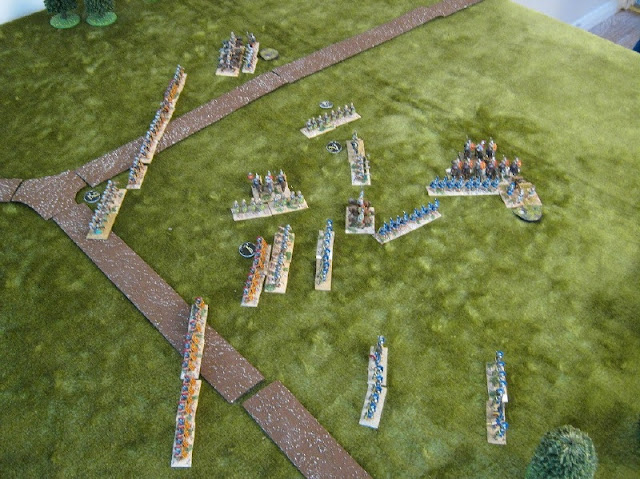 A success for the Blue forces as the Red cavalry charged a unit of Legionaries and a Bolt Shooter and lost the combat. 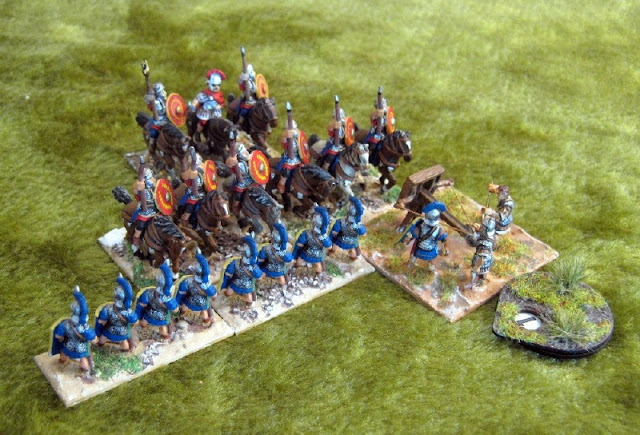 However it wasn't enough to save the Blue forces who were now out of position to stop the Red advance. 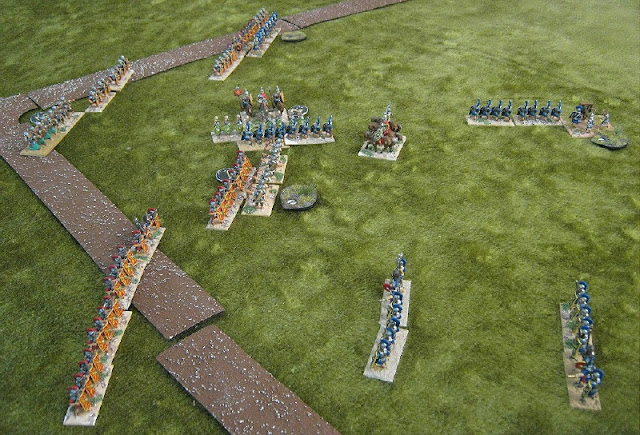 We both enjoyed the game. Sword & Spear are great rules.

The Bolt Shooters didn’t score a hit all game. The only time they contributed to a success was in the melee at the end. Next time we might try treating the targets of Bolt Shooters as "Lacking Protection" instead of just "Ignores Armour".

Posted by Colin's Wargaming Stuff on March 07, 2017 No comments: