I've now finished the last unit of cavalry, a unit of irregular Tartars. Together with a couple of units of Akincis and some Irregular light cavalry these complete the mounted arm of my Ottoman Turks.  These are particularly useful as they could be pressed into service with various other armies, such as my Mongols or, once they are sorted, a Polish army to face off the Ottomans.

So the usual before and after photos. 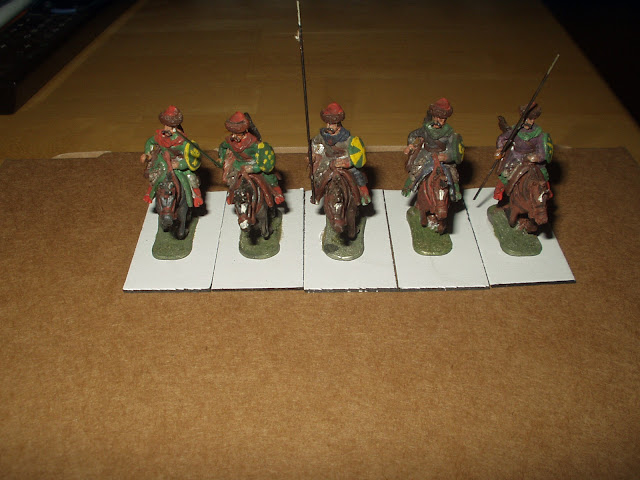 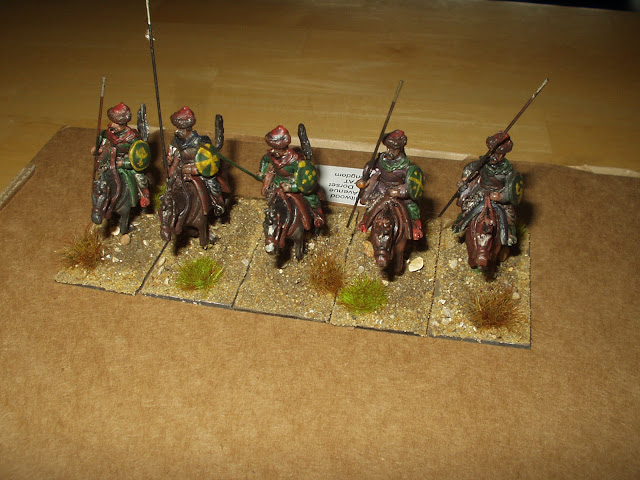 As well as my Ottoman work-in-progress, the recent generous donation of figures resulting in other club members obtaining boxes of goodies. Ian bagged a shoebox of 25mm English Civil War figures, mostly a mix of Minifigs and Hinchcliffe. He decided that, in keeping with the era the figures hail from, he wasn't going to do anything too clever, so he simply replaced missing pikes etc, stuck them on new bases, just painted green and flocked. The result was a perfectly presentable army and, more importantly, ready to play and on the table when I'm only halfway through the Ottomans.

He has had a (long) ongoing project to put together 10mm forces to play Peter Pig's "Regiment of Foote", so the new acquisitions were based up for those rules. Technically it's a few stands of cavalry light, but there is just enough to field two armies for the rules, which is what we did at the last club meeting. 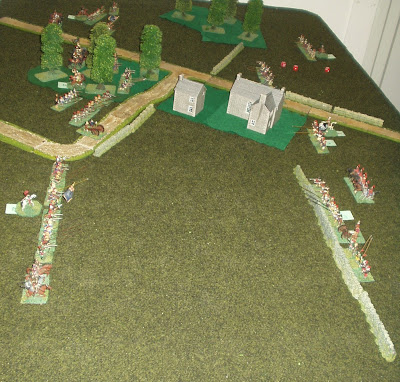 At last Friday's club meeting Alan and I tried another game between our Mongol and Rus armies using the excellent, Soldiers of God rules. Soldiers of God is designed to refight battles of the Crusades, but after a few games we thought that it might also work for the same time period in Eastern Europe, as all the troops types required are covered by the rules. Currently we use the cards that come with the rules, using the Islam cards for the Mongols and the Crusader cards for the Rus,

Despite a more aggressive battle plan the dice were against the Mongols who deployed first, massing the Mongol cavalry, both light horse archers and lancers, on the left flank and their, less than dependable, Volgar Bulgar allies on the right. The centre was held by a single unit of horse archers, the idea being to delay the Rus centre while the cavalry smash the enemy's right.

The Rus responded by deploying their own allies, all skirmishing cavalry and infantry facing the Volgar Bulgars, their crossbowmen and both mounted and dismounted Druzhina on the right facing the Mongol cavalry and  archers backed by urban militia spearmen in the centre with the heavily armoured Senior Druzhina cavalry. Their idea was to hold the flanks whilst destroying the centre and allowing their armoured cavalry to turn and roll-up one of the flanks. 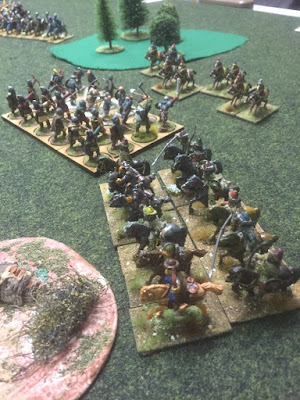 Feudal Sipahis
These were the main fighting arm of the cavalry, known as the Timarli Sipahi. They were fief-holders, owing military service in exchange for land, in the same manner as the European knight. They served as armoured cavalry, accompanied by similarly equipped retainers. The larger the land holding, the more retainers a Sipahis was expected to provide.In the classic Ottoman deployment the Sipahis formed the two flanks, with the Timari Sipahis  deployed forward with the Sipahis of the Porte in reserve.

Before the process started. 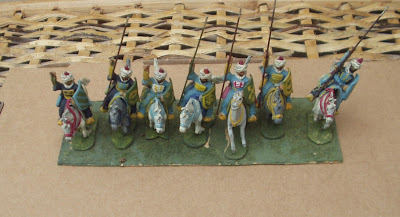 After a grey wash and varnish. 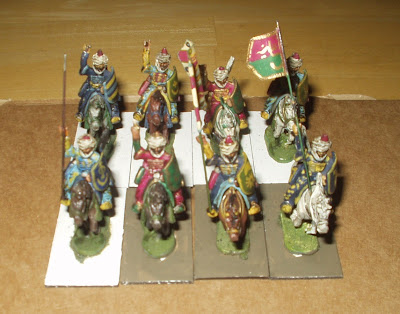 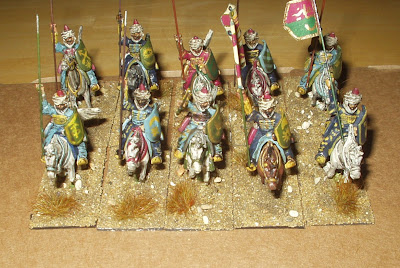