Mark and Colin joined me in a Wild West gunfight game at the last club night. Using my home brewed rules we got two games in and had a lot of laughs.

The first game was a straight forward "Who's the Boss Around Here?" game. Three gangs fighting to the last man standing. Mark got into character with his Mexican banditos, his boss left his men to do the fighting while he crept around the back of the town and his henchman dodged down the middle of the street from civilian to civilian, using the startled passers by as human shields! Despite this Colin won the first game.

The second game was a treasure hunt. We were all former members of the same gang who had been double crossed by our old gang leader. He had made off with the loot and hidden it about the town before getting himself killed falling over the whorehouse balcony whilst drunk. We needed to search the buildings and find the loot. If a character tried to enter a building through the back door there was a 50/50 chance it was locked. Entering a building by the front door was OK, but if you can in by the back there was a chance that an angry householder would take a pop at you, the chance increasing if you had broken in. One on my minions was the first into a building, when he broke into the back of the hotel. In so doing he woke up the barmaid, who rushed downstairs in her underwear and blew his head off with her trusty winchester! In the end three of the first four kills went to angry townsfolk! But I managed to grab the bulk of the loot and escape, chased by my former gang mates. 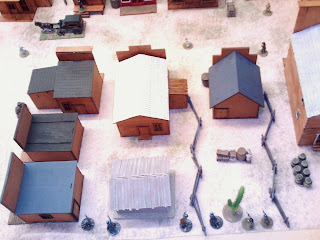 The east side of town. 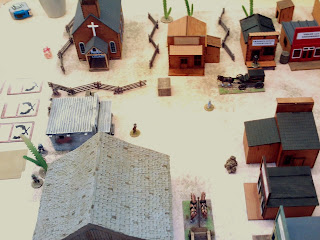 And the west side. 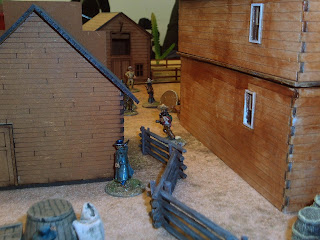 The banditos close in on my gang. 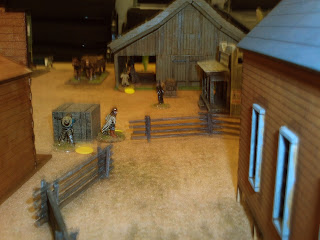 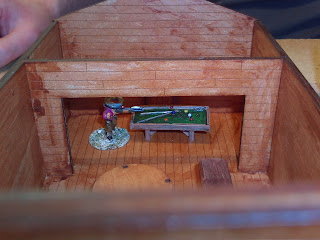 When searching the saloon, one of the Mexicans takes a break. 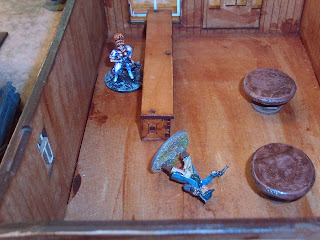 My encounter with the barmaid!

Other games on that night: 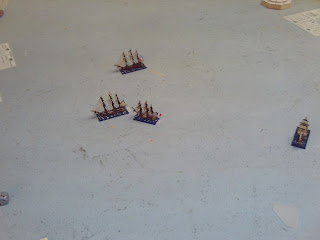 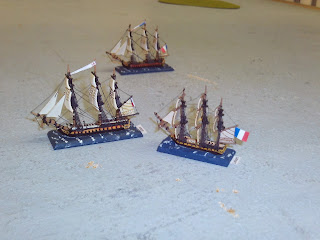 That British ship looks ganged up upon! 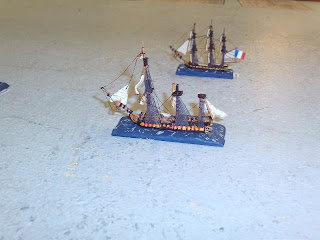 Opps, where did me masts go? 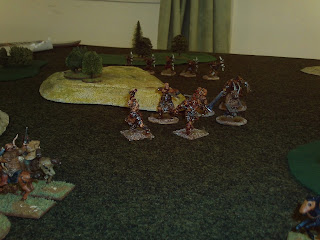 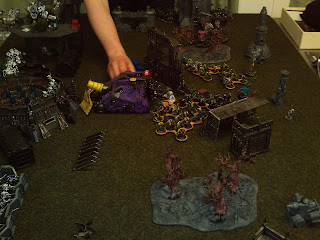 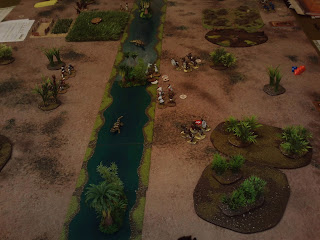 We played a Franco-Prussian War battle using the Fire and Furia Francese amendments for Fire and Fury (produced by the Wyre Forest Wargamers).

It pitted 3 Prussian Corps against the equivalent of two French ones. The battlefield is shown here, with the initial French units deployed. 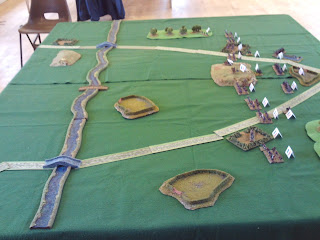 The Prussian objectives were to maintain control of the bridges across the river and seize the road junction at the French table edge. The French had a choice either to Attack, in which case the objectives were the bridges, or to Defend, where the objective was to hold the road exit. If the chose the latter then and units from the off-table reserve that was destroyed, would count against their victory point total. After a brief debate, the French commanders decided to defend.

The Germans decided to ignore the defended hill in the middle of the table and instead threw all their strength up the flanks in a pincer attack. On the right the attack followed the course of the road, whilst on the left the commander made a feint up the road whilst the bulk of his units advanced behind the wood.

On the right it was a hard fought struggle, with one French regiment heroically holding back an entire Prussian division for a time. A French counter attack broke the first line of Prussians and temporarily held them back, but numbers (and massed artillery) began to tell. The first reserve division was brought up to plug the gaps on the French left flank.

On the other side of the battle the Prussian feint suffered heavy casualties but succeeded in holding the French defenders in place whilst the flanking divisions slowly advanced. Reluctantly, the final French  reserve (a division of the Imperial Guard) was brought on and rushed out onto the extreme right flank to block the Prussian flanking attack.

The Guard fought well, destroying the leading German regiments, over-running their artillery and sending the rest reeling back with a bloody nose. But despite this success, it meant that they were effectively taken out of the more important action around the objective road junction.

With their front division in tatters, the French reserve fought a fighting retreat to the junction, losing two regiments in the process, but just clinging on until nightfall. It was a French victory, by the skin of their teeth, another hour of playing time would have almost certainly seen an overwhelming Prussian victory. 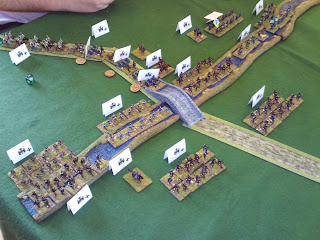 The Prussian Right Flank advance, that's a lot of artillery on that road. (Unfortunately I printed most of the Prussian unit cards upside down!) 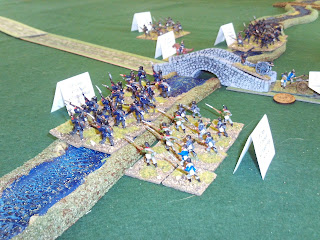 Getting their feet wet in the process 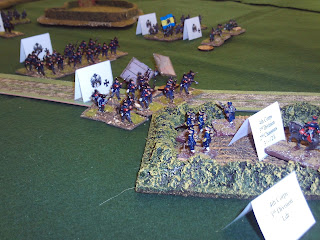 Over-running a unit of chasseurs 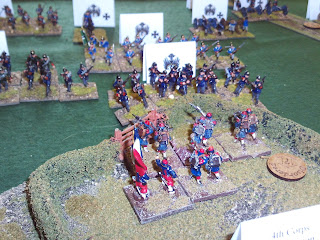 The heroic French regiment holds off yet another attack 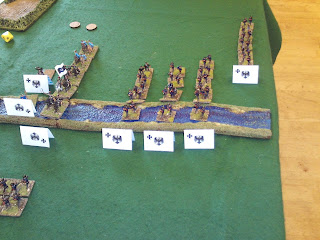 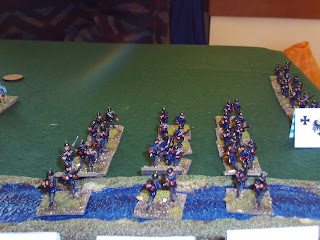 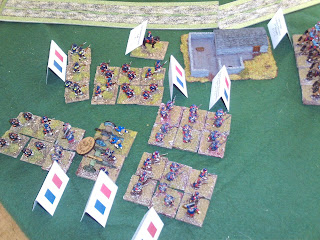 The French guard advance to stem the Prussian flank attack 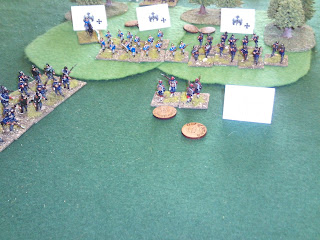 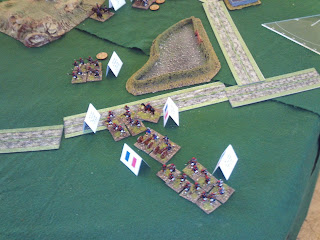 The final French rearguard prepare to hold back the German masses

The other game was an impressive 6mm refight of Borodino using Black Powder. 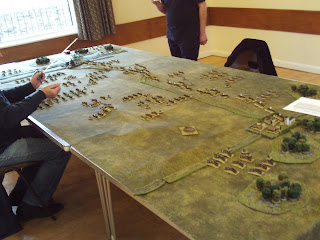 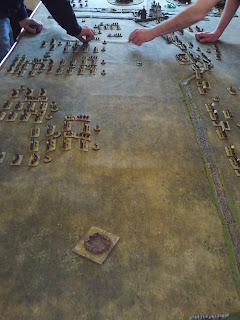 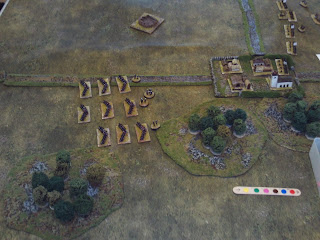 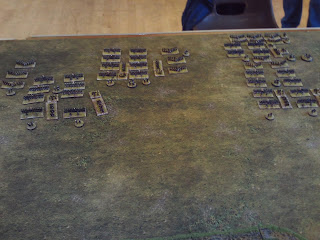 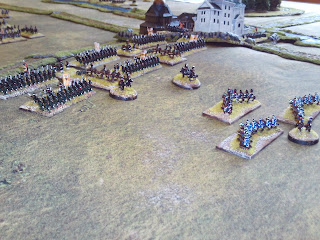 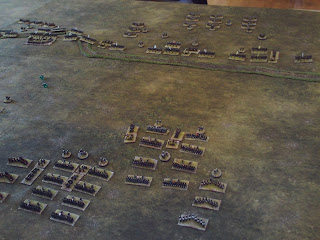