I took my VSF variant of Sellswords and Spellslingers for it's first public try-out at the club on Friday. There were three players, myself, Mark and Colin, each with 3 Player Characters.

I've already posted full details of these scenarios online here for anyone interested in the full details.

Player Briefing Scenario 1
You are agents of Her Imperial Majesty, Queen of Great Britain, Empress of India etc., carrying out clandestine operations on behalf of HM Government.  Be aware that other government departments may have agents operating in your vicinity. This can be an inconvenience at times as these agents may get in the way of your operations. However, please note that it is not permitted to engage fellow Imperial agents in combat, no matter how annoying they may be. It is also frowned upon to allow fellow Englishmen (or even Colonials) to come to harm if you could reasonably prevent it.

The renowned British archaeologist, Professor Mortimer-Whining, has successfully discovered the remains of a previously unknown, mysterious, stone-built settlement, deep in the jungle. Rumours say that the Professor had found an enormous stone structure, built on a scale previously unseen in this part of Africa. After 2 months of excavation he started his return journey to the coast with a train of porters carrying the artifacts that he had found during his dig.

The local tribes were much “put out” by the Professor’s unwanted interference with, what they considered to be, a holy site. Fearing for the safety of the Professor (and his mysterious artifacts), all agent of Her Imperial Majesty’s Government in the locality were been ordered to rush to intercept the Professor’s column. You all reached the Professor’s encampment at dusk, only to discover you were too late, the local tribes had attacked the column on the march and the porters had scattered in panic.
At first light you set off with the aim of rounding up as many of the porters as you can and salvage the artifacts. 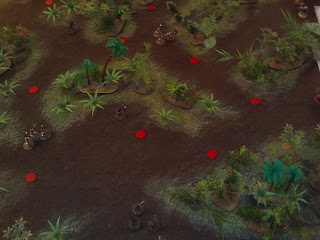 The table at the start of the game.
The red markers are points to be searched that might represent a missing porter. This game began exactly the same way as both test games for me, my first PC failed an activation and drew the Stepped on a Scorpion card! So 1 hit on my Hunter before the game had even started. With one of the tough elite warriors in front of me, my Hunter and Soldier of Fortune stayed on the table edge and shot at him, whilst the Missionary moved cautiously forward. In the meantime Mark and Colin moved forward straight away. 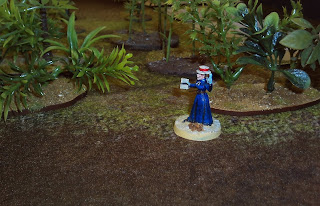 My Missionary moves forward.
Colin was slowed down by a lack of successful activations (including drawing the card to bring a hungry lion onto the table), but Mark rushed forward, gunning down anything in his path and finding the first porter. Over on my side a bunch of native warriors turned up and charged the Missionary! The first warrior in contact stabbed her with his spear, but she deftly parried the attack with her bible. She tried preaching to them to avoid their attack, but they would not listen so she whacked the first warrior around the head with the good book, felling the impudent scoundrel! 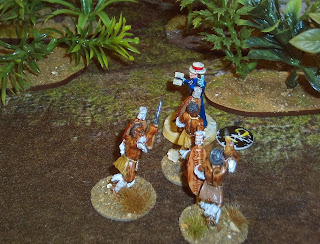 The Missionary in trouble.
My chaps with guns downed the two rearmost warriors and the lady knocked the last warrior into a coma, but not before taking a wound herself.
Whilst this was going on, Colin had snagged himself a porter and Mark had grabbed three! Mark's Mechanical Automaton was proving very successful. The machine acted as a bodyguard, giving a dodge roll against shooting and would attempt to ram attackers out of the way (which was useful when the Scientist was jumped by 4 warriors!). But that hungry lion was drawing nearer and two more groups of warriors had turned up just behind Colin's party. 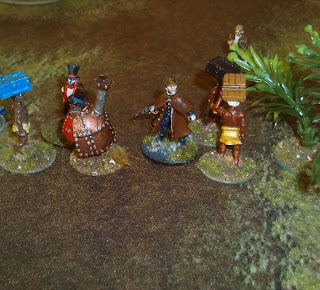 With most of the natives in front of us dead and the lion heading Colin's way, Mark decided to split his party. The Scientist and Gentleman Adventurer headed back to the starting edge with the porters and the Soldier of Fortune kept going to try and grab one more.
Colin's Scientist got badly hurt when he was mauled by the lion, but fought it off so that his Hunter could finish the beast off with a couple of well-aimed shots. Fortunately his Scientist had a supply of |Mrs Pinkam's Restorative Compound, so he could heal some of the damage. In the meantime his Gentleman Adventurer found another porter. But now he was being attacked on all sides by natives and taking more wounds, so decided to exit whilst he could. 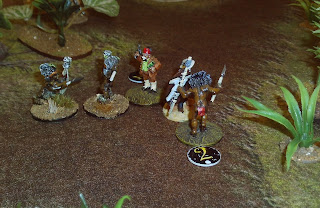 Colin's party in trouble!
I had finally got my party away from the starting edge and found myself a porter. Seeing Mark retreat I decided to press on as there were several unsearched markers towards the far edge of the table. Unsportsman like, Mark rushed his Soldier of Fortune to one of the markers I was heading for! Which turned out to be a ported with a warrior guard. The dice were against Mark in this final combat and his PC was killed by a spear thrust. My Hunter promptly shot the guard and my Missionary rushed forward and scooped up the porter. After checking the last couple of markers, I too called it a day.


You are agents of Her Imperial Majesty, Queen of Great Britain, Empress of India etc., carrying out clandestine operations on behalf of HM Government.  Be aware that other government departments may have agents operating in your vicinity. This can be an inconvenience at times as these agents may get in the way of your operations. However, please note that it is not permitted to engage fellow Imperial agents in combat, no matter how annoying they may be. It is also frowned upon to allow fellow Englishmen (or even Colonials) to come to harm if you could reasonably prevent it.

On returning from a 2 month expedition, the renowned British archaeologist, Professor Mortimer-Whining, was attacked by the local tribes. Whilst you (helped/hindered by agents of other government departments) were attempting to retrieve his lost archaeological artifacts, a group of villainous Zanzabari slavers raided the Professor’s camp.  They kidnapped the Professor’s daughter and stole the few artifacts that the porters hadn’t already run off with.

You feel it is your duty to pursue the ruffians, you can’t leave the Professor’s daughter in the hands of slavers (plus you have a suspicion that the artifacts stolen may include the Professor’s map to his mysterious site). Unfortunately your rivals have had the same idea. You track the Zanzabaris to a small village some distance to the south by a dried up river bed. The inhabitants quite sensibly left at the news of the approaching brigands, you have apprehended one of them who confirmed that they saw a white woman and several boxes and chests being carried by the raiders. At dawn you intend to raid the village and liberate the unfortunate young lady, from the hands of the slavers. The Professor will undoubtedly pay for the return of his daughter, and if you can grab some artifacts, and hopefully the map, as well, so much the better. 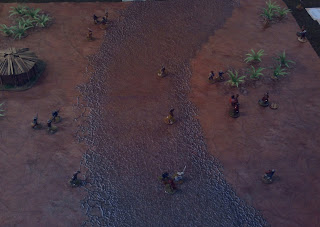 The situation at the end of the first turn.
Colin and I both suffered from a lack of successful activations at first, which allowed Mark's two surviving PCs to get a head start across the table, but brought on a lot of reinforcements. Once again the Automaton proved it's worth, allowing the Scientist to survive a hail of bullets (the slavers are classed as poor shots, so once in range it was a 50/50 chance of whether they would shoot or charge into melee). Unfortunately for Mark, his Gentleman Adventurer found his revolver jammed, just as a lot of slavers started to close in! 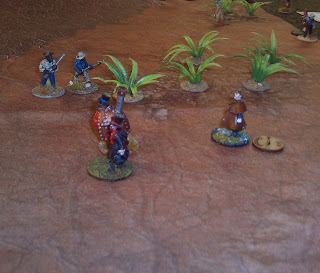 The Gentleman struggles to clear his gun as the enemy draw nearer.

It was turning into a bloodbath, with more and more enemies turning up as we all had a run of bad dice. To add to our potential problems, a rogue elephant wandered onto the table as well! At least my shooting was good and I managed to fend off the attackers on my side, but Colin was taking the worst of it. 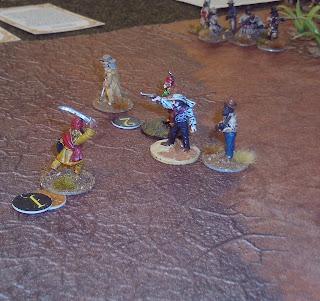 Attacked from all sides!

As multiple foes charged in, Mark's Scientist triggered his Prismatic Shield, a forcefield of energy which "bounced" his attackers aside, knocking them to the ground. Having cleared his jam, the Gentleman Adventurer rushed up and despatched the prone slavers before they could rise. 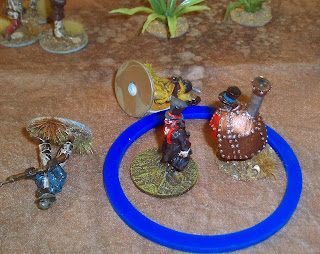 Mark uses his Prismatic Shield.
Things were looking pretty unhealthy for all of our parties, we were only a third of the way across the table and there were enemies swarming everywhere. It looked like a unsuccessful mission when I had a stroke of luck. After killing one of the slaver leaders, my Hunter discovered that the villain had not been carrying a carpet over his shoulder, but the Archaeologist's missing daughter! 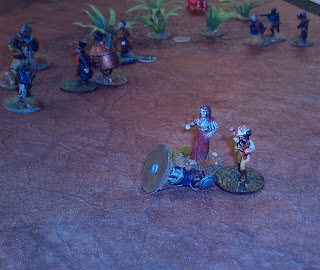 Freed!
We all decided that discretion was the better part of valour and everyone headed for the nearest escape route. Sadly Colin's Soldier of Fortune was the last to escape and paused too long at the table edge (well failed all three activations to be honest!). A nearby horde of slavers riddled him with bullets and he dropped to the ground! 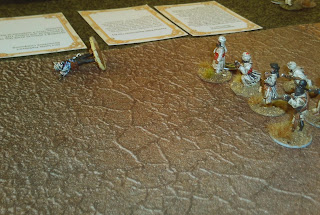 Gunned down!
Great fun and two very different games! The lack of successful activations had penalised us in the second scenario. If we had needed to more further across the table in order to find the missing woman, I think we would all have been wiped out.