Sword and Spear - 10mm Wars of the Roses game

We gave Sword and Spear another outing with our Wars of the Roses armies at the last club night. We have played these rules a few times, but I'm still not convinced with then for this period. I've previously enjoyed them for games with Dark Age shieldwall armies and Roman era games, so we will persevere. I think we need to try a couple of tweaks to better reflect Bill and Bow units and see how they go.

The battlefield was an open valley with hills and wooded areas on either edge.
Mark and Henry set up the Yorkists with their mercenary pike block in the centre of the line, with their Irish kerns on one flank and mercenary handgunners, backed by border horse, on the other.
I decided on a bit of a gamble and split my Lancastrian force, intending to take the high ground on either flank.  On each flank I put bowmen on the far end of my line with the melee troops closer to the centre of the table. If I took the hills I could hope the advantage of the ground would help be beat of their attacks, or if I had the opportunity I could envelope one (or both) of their flanks.

On Mark's flank my archers quickly took possession of the hill while my handgunners into the wood in front of it. Mark countered by moving his handgunners up block them, but that brought them into range of one of my longbow units, who rolled a 6 for activation (which I used to add a bonus to their shooting) and cut the handgunners down. His line now look a bit exposed so he brought the border horse forward to screen his flank.

On Henry's flank the hill was farther away so my longbowmen plodded forward onto the lower slopes. The Yorkist main line didn't do anything much for the first few turns of the game. Henry was reluctant to advance until he had secured the hill on his flank and Mark didn't want to advance unsupported. I wasn't sure why, my deployment meant I was effective fighting two separate battles on the flanks, The gap between my troops was for too much for me to have reinforced the flank facing Mark, even if Henry had decided to retire! As it was, their inactivity allowed me to concentrate on my flanking maneuvers.

Henry decided to contest the hill with his Irish kerns and moved them forward, reaching the top of the hill first. However light infantry with javelins against longbows wasn't going to end well...and it didn't. One kern unit routed straight away from the arrow storm. The other did get close enough to inflict one hit on a longbow unit before it to was blasted away. Henry now brought his reserve unit of mounted men-at-arms up but my longbowmen planted stakes and stood back, making rude hand gestures. He decided a frontal charge probably wasn't worth it, so pulled them back again, out of range.  This allowed me to take control of the hill, from where I could pepper his infantry with bowfire if they decided to advance against my melee troops after all.  In the next turn Henry decided to strike before my archers had time to set their stakes and charged up the hill with his knights in very shiny armour. He hoped the lance charge would smash the unit on the end of my line and give his infantry the opportunity to advance unmolested. \Even with the advantage of ground I was not in a good position, but the dice gods smiled upon me and the charge failed, with equal casualties on both sides. This was the opportunity my border horse were waiting for as they were hanging around behind the line of bowmen and they charged the end of the knights line in turn. It was enough to send the knights over the edge and the unit routed. Henry now pivoted the end of his line to face the bowmen on the hill.

On Mark's flank I had positioned two longbow units to be able to shoot at his flanking unit, whilst the handgunners moved around their flank.  The light horse were quickly cut down by the archers and I moved on to his next unit in the line. Seeing his line slowly crumble didn't appeal, so Mark decided to charge forward (at last), detaching a longbow unit to prevent his line being flanked. It didn't help, now under fire from 3 units, the flank guard soon gave way. As the Yorkists advanced their archers concentrated on my men-at-arms in the centre of my melee line, who took a couple of hits before the lines clashed. In the melee Mark concentrated his attacks on the men-at-arms, hoping to break them and isolate the billmen on either side. Overall he inflicted more hits than he took in the melee, but my line held and I now had archers behind the Yorkist flank. My next activation roll was just what I needed, two 6's and two 5's! I was able to charge a unit of archers into the flank of Mark's end unit, the maneuvre another unit of archers aside, allowed a clear charge for my reserve heavy cavalry to hit the same end unit. Under the successive hammer blow the unit routed.

By now the Yorkist pikemen in the centre had started to move across to support Mark's attack, but it was two late. In the next round of combat, as I rolled up his line, two more units routed and the Yorkist army reached break point!

No so many pictures this game, I'm not sure what was wrong, but several came out blurred this time. 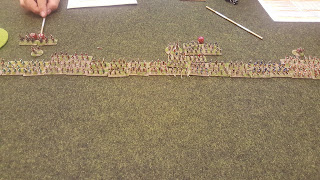 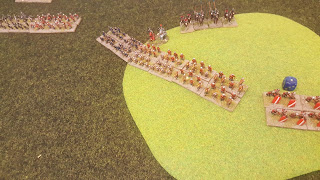 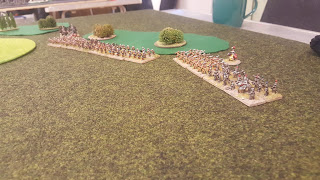 Kerns and Knights face off against my longbowmen 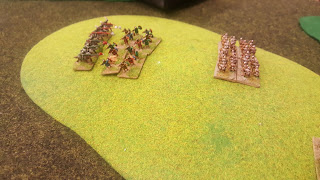 Yorkist losses at the end of turn 2 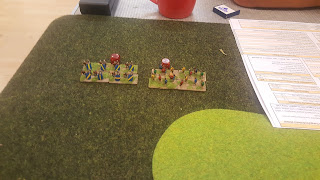 Yorkist losses at the end of turn 4 (sorry no pictures of the Lancastrian losses, I didn't lose a single unit in the game) 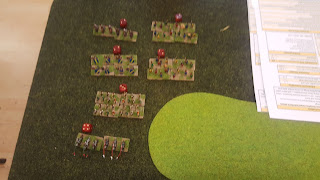 Other games on that night. 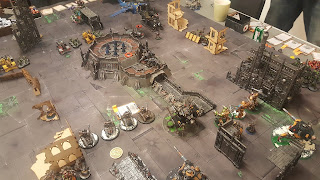 WW2 Chain of Command, somewhere in the Far East 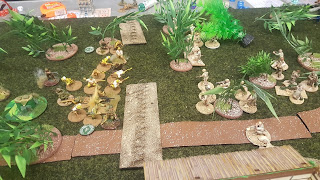 And a blast from the past, Man O'War 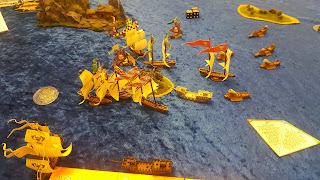