We played a couple of games of Dragon Rampant at the club last night with 36 point armies. Henry's Lost Tribes (a mix of Amazons, pygmies and warrior tribesmen) against my Stygian (from the now defunct Chronopia game).  It's amazing how the upgrades just eat points in DR, for my 36 points I just had a wizard, two big heroic beasties and 2 units of light foot. It was also a good excuse for me to dig out my fantasy terrain features that hadn't been used for a while. I've got a couple of burial mounds, a stone circle and stone tabletop tomb which I'd originally collected as strongholds for Hordes of the Things armies.

The first game was the Ringbearer scenario and I had the ring. I gave it to my Guardian (big beastie) but didn't keep him back so Henry assumed that the ring was with my Priestess (General Wizard) who was at the back. It was a fun game, but Henry's deployment let him down. While the bulk of his army attacked across the table, he tried a outflanking march with two units around a wood. Unfortunately he put his heavy foot (slower with better armour) on the flank and his light foot (fast with less armour) in the centre.

While his heavy foot plodded along I cut my way through the rest of the army. The other big beastie, the Embalmed, was particularly effective. Classed as elite foot Manslayer, it just chomped it's way through the pygmy light foot. In one round it scored 12 hits, with an armour of 2 half a unit of pygmies disappeared in one go! The Embalmed eventually died, but not before it had wiped out 3 units. By the time the flank attack arrived, they were all that was left of the army and a combination of shooting and spells weakened both units before closing in for the kill. One tribesman unit made a last ditch attempt to kill the ringbearer, but went for the wrong unit. Fortunately my Wizard was uphill and, although wounded, fought off two charges until help arrived. In the end all Henry's army was dead, I,d lost the Embalmed and a unit of light foot.

Ian joined us for the second game, which was very different, we played the Scared Mole of Ukkert and I had the treasure. I just had to get my stolen loot from one corner of the table to the opposite corner. A really bad leadership roll (three ones!) meant I had to test the loyalty of all my units, on a score of 1 they would desert and I managed to lose the Guardian before the game even started. I gave the loot to one of the faster moving light foot units and tried to rush them across the table. The Embalmed headed off to take on Henry's Pygmies whilst the rest of the army acted as speedbumps against the heavier stuff commanded by Ian. It almost worked but I got caught within a move of the escape point. My light foot got shot up by the pygmy boar riders then charged by a unit of heavy foot and wiped out. Ian then moved the treasure bearers behind a line of units. This time the larger size of the Lost Tribe army came to the fore, as there was just no way I could get to the treasure in time.

Two great games and a lot of fun and laughter. I'd found the magic to be quite effective, especially in the first game. Although Power Bolt appears the most effective spell, I found judicious use of Stronger Shield and Sharper Blades on my best melee units to be devastating in close combat. 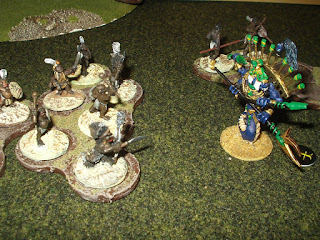 The Embalmed contemplates it's next meal. 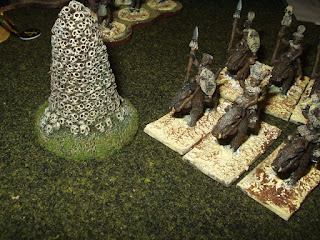 The pygmy boar riders pass a milestone (count the skulls, that's how many leagues to go!) 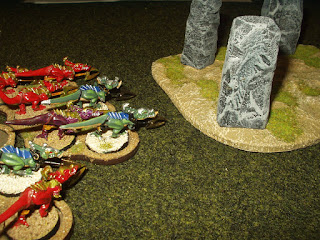 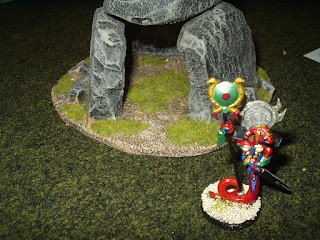 The Priestess prepares to zap someone

It was a quieter night with only two other games this week. A 15mm ACW Fire and Fury game set in New Mexico, hence the cacti. 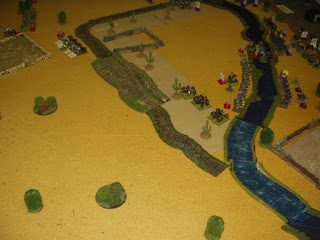 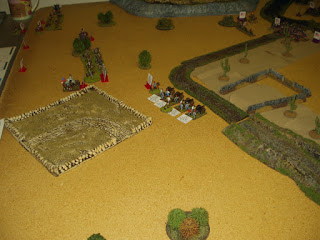 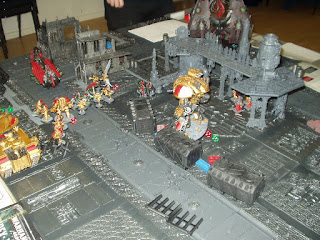 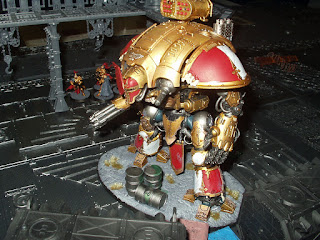