Arnhem The battle in the town September 19th 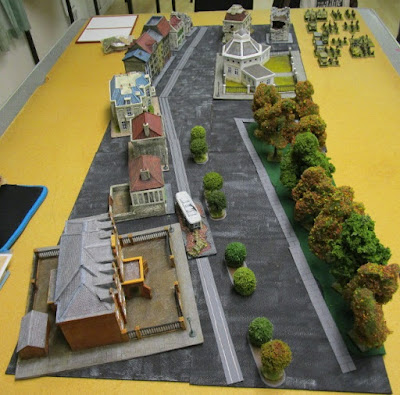 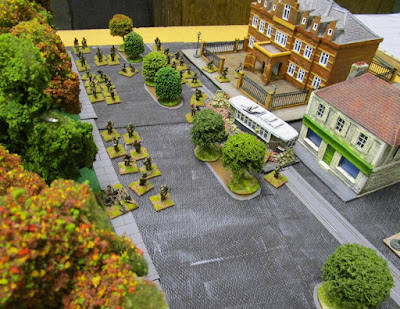 Under cover of darkness the South Staffords advanced up the main street. 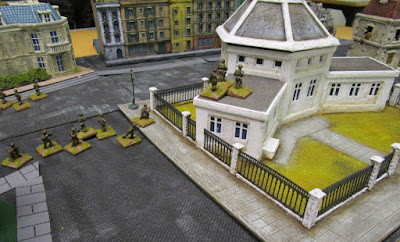 The South Staffords come under heavy fire and suffered heavy casualties. They fought their way into the Arnhem museum. 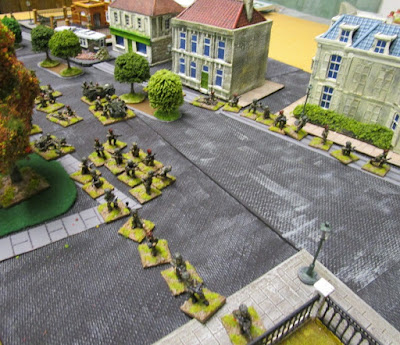 The 11th Para move up the street in support.

First Game of The Pikeman's Lament - Ottomans and Poles

We tried out The Pikeman's Lament at the last Tring Club night and were very pleased with the rules. We also managed to get almost 3 games into 3 hours playing time (due to unforeseen circumstances we had to cut the last game short, but I reckon another 30 minutes would have seen us to the end of that as well).

I thought about making the Hussars Aggressive, but decided not to until we had tried a few games out. I'm still undecided with the Polish light cavalry, Tartars are obviously Dragoons, or Veteran Dragoons, but armed with lances I'm not sure whether the Cossacks were primarily skirmish or melee troops.

Sipahis of the Porte tended to be used as the heavy cavalry reserve, so I felt Gallopers suited them better. I'm not sure about other Sipahis as Trotters, but that suits them better than Gallopers or Dragoons. I may need to play about with the troop types a little bit here.

The first game was the Ga Pa scenario. For some unknown reason the Polish Commander placed his officer in one of the Cossack units, which made him quite vulnerable. The Poles put their shot in the centre and quickly moved them onto a hill, where they stayed for the game, mainly sniping at passing Turkish horsemen at long range. On the left flank the Dragoons and Pancerni faced off against a unit of Sipahis and the skirmish infantry, whilst on the right flank the Hussars faced the Sipahis of the Porte supported by the Tartars. The Cossacks were in the centre on either side of the shot, facing the last 2 Sipahi units.

On the left the Dragoons hung back whilst the Pancerni rapidly advanced against the Sipahis. The Turkish infantry ducked into a nearby wood, from whence they picked off a passing Pancerni. The Pancerni charged and we followed what was to become the standard format for melees in this game. The Gallopers won the melee, the Trotters failed their morale test and fell back, wavering. The Gallopers used their compulsory follow-up, winning again. I rolled crap morale dice and the Trotters routed. The Pancerni had only lost 1 man in melee, but the skirmishers in the wood picked off another one, so at least they were down to half strength.

On the right the Tartars advanced into range of the Winged Hussars and killed one man. Now the Hussars charged but the Tartars evaded out of range, peppering the Hussars with arrows. This opened up a gap between the Hussars and the Officer's Cossack unit and I threw my Sipahis of the Porte into the gap, supported by another unit of Sipahis. Now my Tartars attempted to Skirmish again, hoping to kill another Hussar and remain out of charge range. This is where things went really pear shaped as I rolled a double 1, then my Tartars went loopy and charged the Hussars! (On a roll of double 1 or 6 for an activation, you roll on a Good/Bad Things happen table). Of course the Hussars counter charged and smashed the Tartars in melee. The Tartars failed their morale roll and fell back wavering, The Hussars Followed up, won again and, guess what, the Tartars routed!!! Sound familiar? 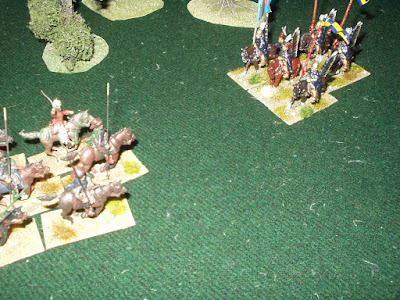 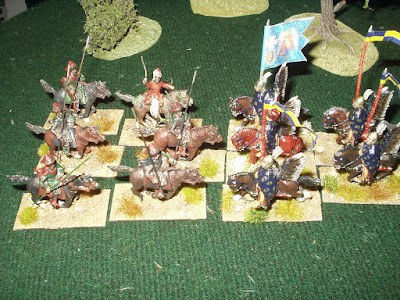 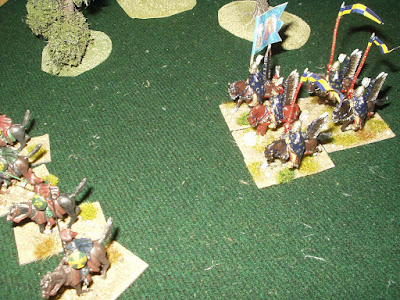 Last summer the club was generously given a load of older wargames figures. I ended up with 2 Renaissance armies, Ottomans and Poles, and I thought it time I caught up on the Polish contingent. Like the Ottomans, they are a mix of old manufacturers from the 1970s/80s, mostly Minifigs and Hinchcliffe, with a few Essex. I quite like this as it's taking me back to the figures I started gaming with in my youth. Again I decided to pretty much leave the painting as it was, other than where an obvious touch-up was required. All I'd do was give the figures a clean, a dark wash and rebase.

The Poles were not a complete army, consisting of about 22 cavalry and 45 infantry, with only 2 Winged Hussars! The infantry would do, but I was way short-handed on cavalry for a Polish army. I've been keeping my eyes open for old figures to fit in with these and had picked up a unit of  dragoons and a unit of Winged Hussars. As I've recently picked up the new Osprey rules The Pikeman's Lament and arranged a game for later this month, I thought it was time to get the Poles into battle order.

Unfortunately I didn't take any pictures of the figures before I got started, but if you look back at the posts on the Ottomans you will get the idea. 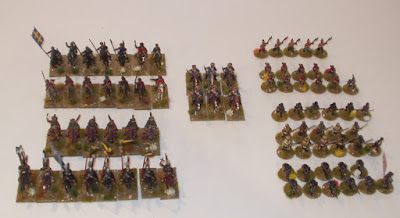 The whole army (so far) 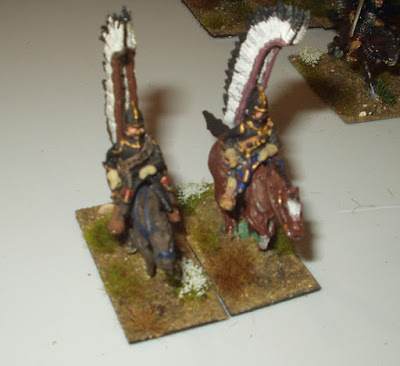 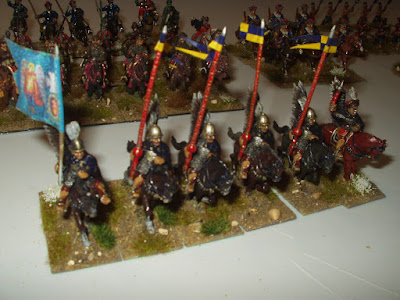 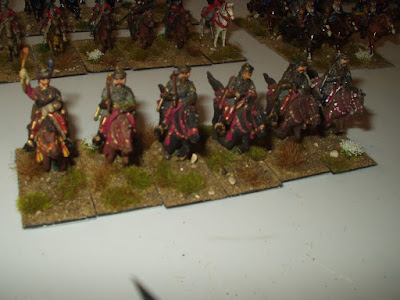 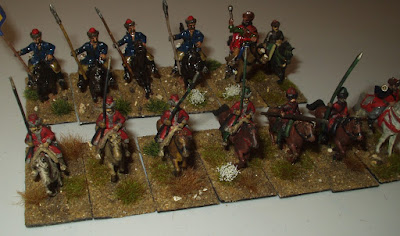 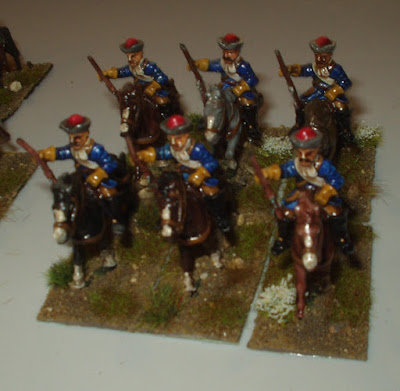 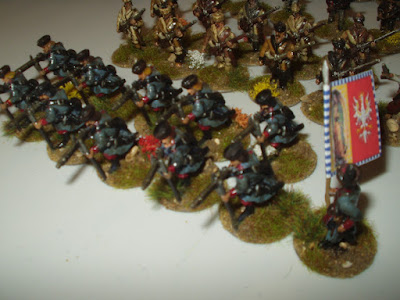 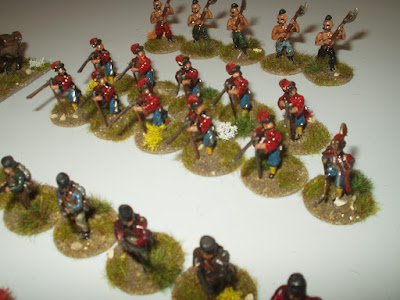 Just in time for the game on Friday! A big thanks to Nigel Billington for letting me download his fantastic Polish flags.
Obviously I need more cavalry for a credible Polish army. The Hinchliffe Winged Hussars are still available so I can add a few friends to my lonely pair and make up another unit. I'll just keep looking for some more old Pancerni and Cossack cavalry.