Vanquish is a new wargames show held in May 2016 at Bourne End in Buckinghamshire. It was a fairly small show, but very well supported with a Bring and Buy, good parking, refreshments available and a bar.
There was a good mix of traders, about 15 I think, plus some Demo/Participation Games.

Our well planned Demo Game had to be hastily rethought when we found the gaming tables were round. Actually it worked very well especially as we had a terrain cloth instead of tiles to play on. 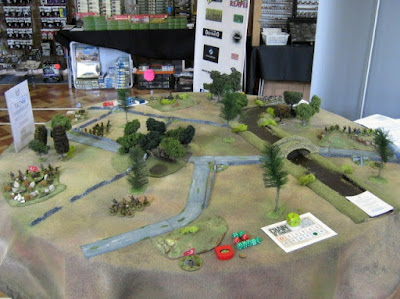 We ran our First Balkans War Demo Game using Chain Of Command rules by TooFatLardies. Several people came and showed interest in the game and the club and some club handouts were taken. 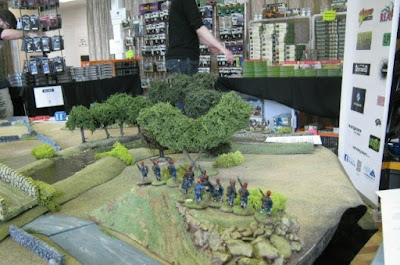 Other Demo and Participation games included a Frostgrave game, The Charge of the Light Brigade and a Napoleonic Participation Game.

At the end we thanked the organiser and asked if he plans to run Vanquish again next year. We were pleased that he does so we asked to be included in the plans.


These photos, plus many others, were taken intended for a Battle Report but then I realised I've already done one during the testing of this Demo Game. So I've tried to use the photos I have got that give some impression of the show. The Battle Report that was done for the test game can be seen here.
Posted by Colin's Wargaming Stuff on May 30, 2016 No comments:

Last Friday Graham and I played our Round 3 game in the Lion Rampant League being played at the club this year.
More details about the League can be found on our website.
The Lion Rampant rules are written by Daniel Mersey and published by Osprey.

We were playing Scenario F: Sausages With Mustard. I was the defender, using my Islemen retinue, and Graham attacked with his Scottish retinue. In this scenario there are 4 objective markers (in the form of supplies) placed around the central deployment zone and the attacker has to try to set fire to them.

For the initial deployment the defender can place up to 4 points of units in the central deployment zone, and all remaining units deploy at opposite ends of the table. I placed my unit of Islemen Archers in the central deployment zone to try to hold off the attackers until some more of my units arrived.
At this end are my remaining Islemen units: two units of Foot Men-At-Arms and two units of Fierce Foot.
At the far end are Graham's Scottish horde: One Foot Men-At-Arms, three units of Foot Serjeants, one unit of Fierce Foot and one unit of Bidowers.

Read the rest of this Post »
Posted by Colin's Wargaming Stuff on May 08, 2016 No comments: