Africa with The Men Who Would Be Kings

I played my second round TMWWBK league game at the club on Friday, using the Herero Tribesmen against Alan's "Explorers" (or"Slavers", depending on your perspective).

We were playing Scenario B, in which I, as the attacker, had to destroy Alan's village (there were 5 huts on the table). The game lasted 12 turns and I got 3 victory points for each hut I destroyed, Alan got 2 points for each hut left standing and 2 points for each of my units he destroyed or routed. This was quite a problem for me as in order to destroy a hut I needed to inflict 10 hits in close combat, unfortunately all my units were irregular infantry who only hit on a 6! Also on reflection, as we were using the skirmish level rules (half size units) I should have reduced the strength of the huts accordingly for this scenario.

Alan placed his mercenary askari in the central hut and a unit of tribesmen in jungle on their flank. His explorers and a second unit of tribesmen would come on as reinforcements. To begin with it want well for me, my troops rapidly advanced and started to attack 2 unoccupied huts, detaching a unit of riflemen to block the tribesmen. I kept my troops in cover, so that the askari's shooting was mostly ineffective. Both Alan's tribesmen units rushed forward but his explorers were very tardy (good for me because they were sharpshooters!) 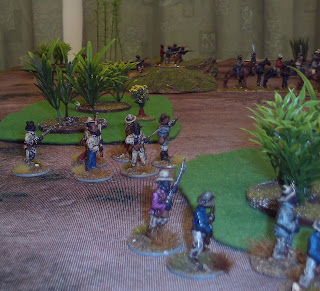 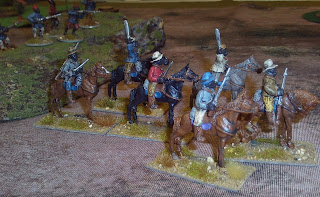 Led by the mounted infantry 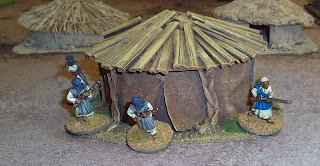 Askari lurk in the hut

On the flank his tribesmen were taking casualties from my riflemen, so they charged them. Fortunately my unit had got behind a thorn fence (counted as an obstacle) which gave then cover. Even so, fierce tribesmen hitting on a 4+ against irregular infantry hitting on a 6 should have been a one-way fight. But I rolled 3 sixes! I lost two me but the tribesmen fell back so I could blast them the next turn at close range. After another cycle with the same results (!) I gunned down the last surviving tribesman. 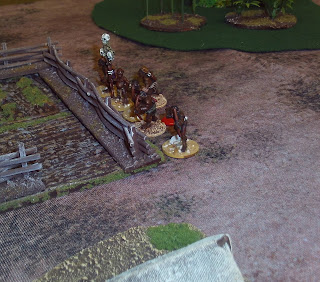 In the centre the askari kept firing (and missing) whilst the other tribal unit moved up in support. The explores had started moving, but still could not get a shot at anyone. In the meantine I kept bashing away at the huts, inflicting a total on 9 hits on both, 1 more hit each and they were destroyed. 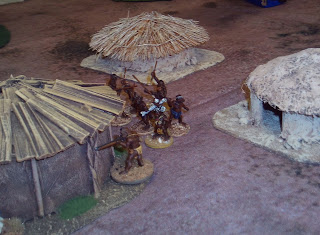 Tribal unit advances through the village.

The tribesmen charged into one of my rifle units, this unit was not fierce, which was just as well as they killed 5 out of 6 men in a single round of combat. As the survivor fell back all I could do was ignore the huts and have every unit pour fire into the tribesmen at close range.That was the end of another unit! 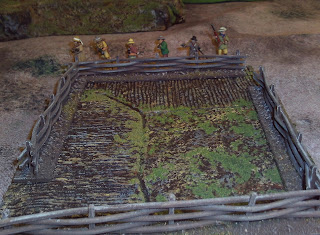 By this time Alan's explorers had got into close range of one of my units and decimated it. As a unit got down to 1 or 2 men I tried to keep it out or range or behind cover, trying not to give victory points away. But in the final turns of the game, just as I destroyed the 2 huts, the explorers managed to wipe out one of my units. So it was a 8:6 win to the defenders.

As unusal with TMWWBK we had time for a couple more games before home time, 1 won the second game and Alan won the third.

There were  3 other games on that evening (sorry no pictures this time), a Chain of Command game set in NW Europe, a Rapid Fire game (also in NW Europe) and a Future War Commander game pitting 6mm Eldar against daleks!
Posted by Sun Jester on January 28, 2018 2 comments: