I had first first outing with Cruel Seas at the club on Friday with Colin and we had a lot of fun. A friend of his has also got the rules and seems to be playing it a lot in his gaming circle, so Colin had previously gone over to see him and get some learning games in. That meant that one of us had an idea of what the rules should play like!

We started off with the second scenario in the rules, so I had two Vospers, trying to torpedo a merchantman which Colin was escorting with an S-boot. 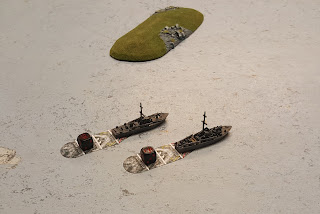 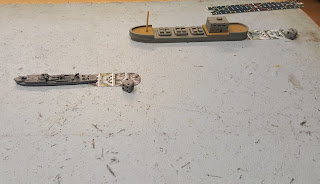 The S-boot moves up to screen the merchantman. Colin had picked up a couple of mdf merchant ships on ebay. They are not the prettiest models in the world, but a lot better than using a card template. And at about a fiver each instead of  twenty-odd quid for the official Warlord models, they are a bargain, leaving you with more money to spend on warships! I've ordered some of the merchant ships and armed trawlers already. 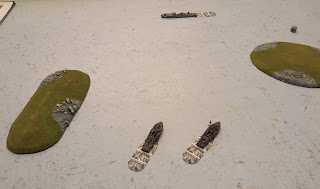 The torpedo boats exchange gunfire at long range, neither of us hit anything! 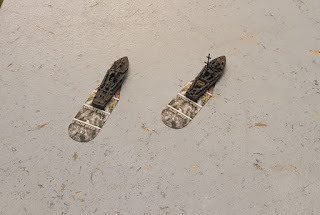 The Vospers throttle back in readiness for making a torpedo run. 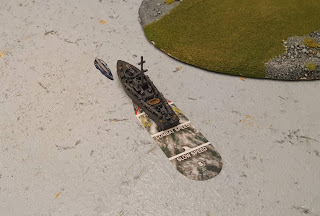 Torpedoes Away! I launch my first tube. 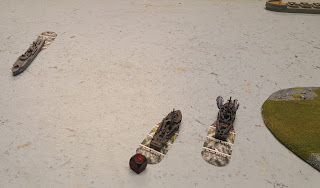 At the same time the S-boat moves in to close the range. 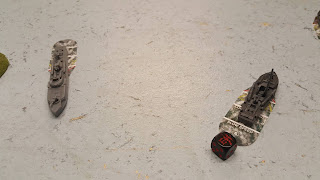 We now had a devastating round of firing, I hit the S-boat with the forward 20mm and scored a critical hit, setting off one of his torpedoes! Explosions rocked the German boat, which looked very low in the water afterwards (only 4 strength points left!).

That looked like the end of the game, we both thought the British would have a walkover now. But then the S-boat fired back...Colin rolled horribly successful dice, taking the Vosper down to 2 point and rolling 4, yes 4!, critical hits in one round of shooting. He hit the fuel, ammunition, a torpedo and the bridge. The little British boat disappeared in a ball of flame and rapidly slid beneath the surface.

At the same time the merchant skipper managed to avoid my two torpedoes. I now had a choice, finish off the S-boat to remove the threat, but then I'd need to chase after the merchantman before he escaped off table. Or ignore the S-boat and race ahead of the merchantman to come around for another torpedo run and hope I could do so before the S-boat got back into range.

I went for the second option, but by devious maneuvring the merchant skipper manged to dodge my last two torpedoes as well.

We then played a second game, using the Rescue scenario. This was a bloodbath for the Brits. 4 Vospers were dreadfully outgunned by 3 S-boats (not helped by my uncanny ability to roll 10s that evening). We called a halt when I had just 1 boat left. Colin had lost 1 S-boat, but that was only because I'd shot his rudder off and he crashed into an island!

A lot of fun, but I think we will be experimenting with balancing the forces out, or giving the Brits some more firepower, the poor little Vospers didn't seem to have much chance unless they outnumbered the S-boats 2:1.

I have also just ordered myself a nice new sea gaming cloth. The club board we were using had been painted blue on the underside for naval gaming, but that had been painted over 20 years ago and the wear is showing.

Other games on offer at the club. 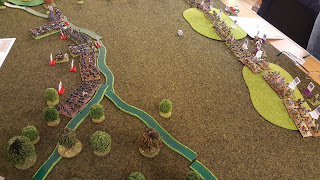 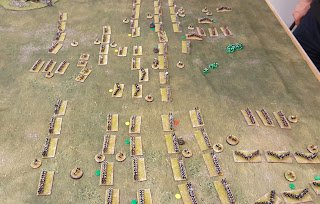 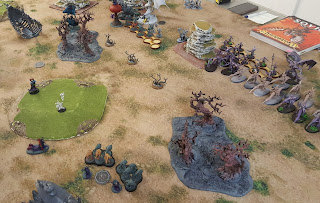 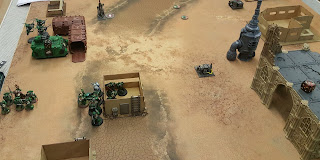 And another 40K game.

There was also a 28mm Chain of Command game, but whenever i looked over to take a picture they didn't seem to have any figures on the table!
Posted by Sun Jester on March 23, 2019 2 comments:

I ran another of my Wild West gunfights using my home-grown rules on Friday.

Mark ran the posse of lawmen who had captured the notorious outlaw Stinking Pete and was es courting him to the local town marshal's office to be locked up until he could be transferred to the State prison. Just before being captured Pete had robbed a gold shipment and only Pete knew where it was stashed.

Colin, Bill, Martin and Henry all had rival gangs of outlaws who wanted to grab Pete and "persuade" him to reveal where the gold was hidden. I umpired and controlled the townsfolk, which included the marshal and his two deputies, in the Marshal's office. They would be activated once some entered the Marshal's office, if the shooting had already started they would be on Wait (overwatch) and able to react, otherwise they would be taken by surprise.

All Mark had to do was get Stinking Pete into the jail, all the others had to do was either take pete off the table, or else be the last man standing! 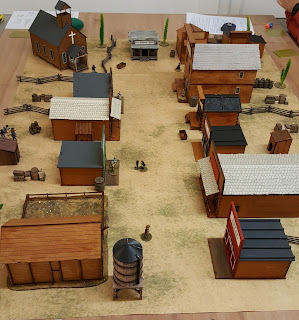 The lull before the storm! Peaceful citizens go about their business, unaware of the chaos that is about to start. 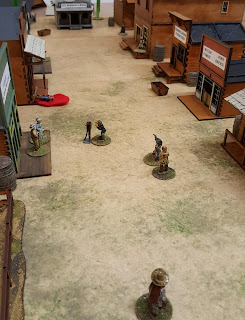 Hell breaks loose! As one of Mark's henchmen leads Stinking Pete down the street, two of Colin's army deserters broke in through the back door of the general store. Startled, the storekeeper blasted them with his 12 gauge, but missed. The returning fire knocked the storekeeper through his own window to land in the street in a pool of blood, to the shock of the passers by. Townsfolk statter and one man starts running towards the Marshal's office to get help. 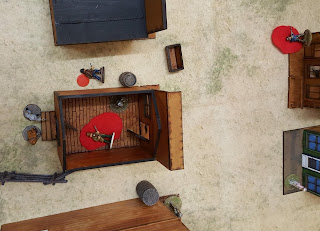 Things start to heat up as one of Martin's minions also breaks in through the back of a shop. This time the shopkeeper is a better shot and the outlaw is cut down. outside Martin's henchman has been knocked down and wounded by fire from the army deserters. 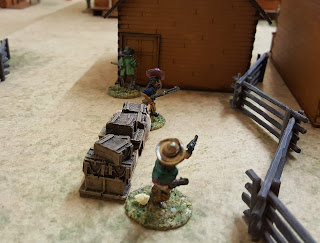 Bill's Mexicans move up across the back of the shops, rather than show their face in the main street. 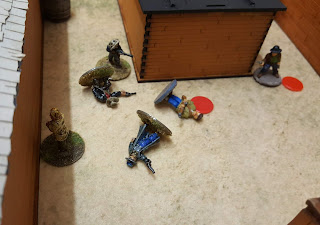 Mark's minion guarding Stinking Pete is shot down and Pete makes a run for it down an alleyway. Mark's lawmen rush in pursuit but Marin's gang try to intervene, starting a close range gunfight. 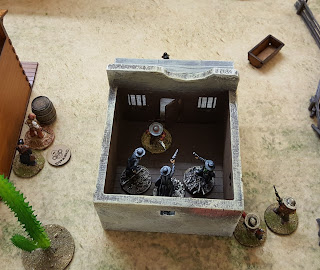 One of Bill's Mexicans decides breaking into the Marshal's office would be a good move. Alerted by the sounds of gunfire, the three lawmen are ready when a strange Mexican waving a gun around bursts in through the door.... 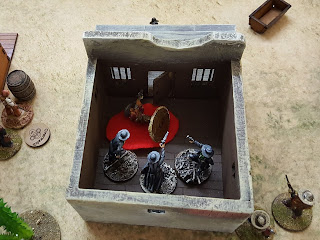 ...and is riddled with bullets! 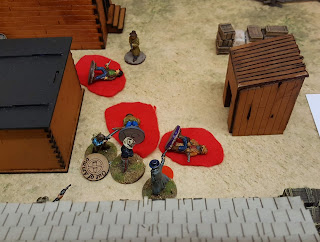 Martin's gang is losing the gunfight with Mark's posse, but Mark loses another man to fire from across the street. 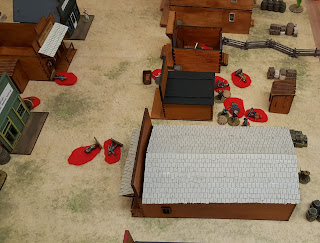 A view of the carnage so far. 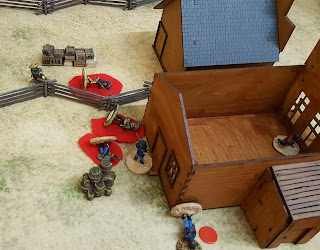 Now the Mexicans and the deserters get stuck into each other in another gunfight that is close up and personal. 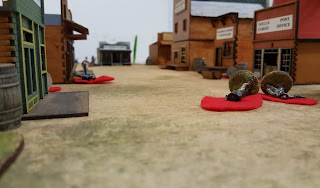 A view down the deserted main street. 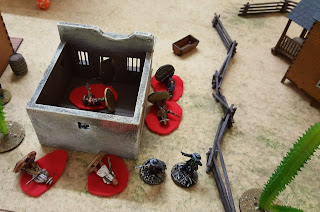 AS the Marshal and his deputies rush out of the jail, one of them is shot down. This just makes the marshal and his last deputy angry and they proceed to make their feelings known, Wild Bunch style! 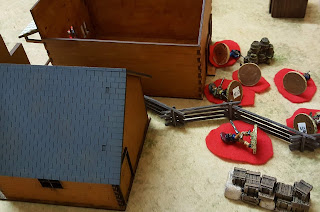 The aftermath of the Mexican/deserter gunfight! Both gangs have decimated each other and got no nearer to freeing Pete! Mark had holed up in the saloon and the last two deserters were cut down when they tried to rush the place. 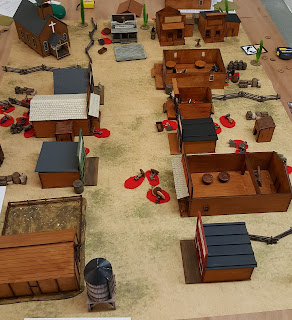 End game! Although the Sheriff had been shot, Mark's senior deputy had managed to get Pete into the jail. There were only three bandits left on their feet from the four gangs and two of those were wounded.

It was a lot of fun for all the players.

Other games on that night: 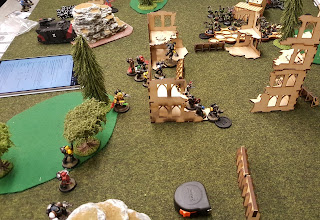 And a Chain of Command game that seemed to only be using the opposite edges of the table? 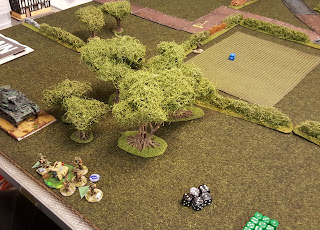 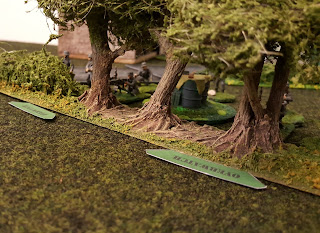