A few days after the Normandy landings the British are still held up in their advance on Caen. The British 50th Infantry Division are attempting to capture Tilly-Sur-Seulles so that the 7th Armoured Division can make an outflanking approach on Caen through Villers Bocage.
This battle takes place on 11th June 1944 as the British try to push the 12th SS Panzer Division out of the villages of Cristot and Brouay, and the overlooking high ground.
The game is 16 turns long.
Victory conditions for are the same for both sides: hold the villages of Cristot and Brouay, and hold the high ground of Hill 102, at the end of the game. Any other result is a draw.

The Germans were using hidden deployment anywhere in the area around Hill 102, Cristot and Brouay.

The British plan was to concentrate on Brouay first, then drive into Cristot from there with reserve infantry making a direct attack on Cristot and Hill 102. With no pre-planned bombardment, the artillery was to provide support as required.


The British attack on Brouay started as planned with infantry occuping cover in Adrieu and the armour moving alongside.

Read the rest of this Post »
Posted by Colin's Wargaming Stuff on April 25, 2016 No comments:

We have two Demo Games planned for this year. One is based on the French invasion at Fishguard (1797) using Donnybrook rules. The second is set during the First Balkans War (1912-1913) using Chain Of Command rules.

Here's some info and a Battle Report for the First Balkans War game.


THE FIRST BALKANS WAR 1912-13
This game depicts a skirmish near the city of Ioannina, by the shores of Lake Pamvotis, in the spring of 1913, using the CHAIN OF COMMAND rules by TOO FAT LARDIES.
All miniatures used are from TIGER MINIATURES.
The First Balkan War occurred due to the Weakening of the Ottoman Empire; which had just lost the Italian- Turkish war in North Africa, and the determination of the new Balkan League (Greece, Serbia, Bulgaria and Montenegro) to resolve their issues of National unity.
Turkish hopes to transfer an army from Syria to the Balkans were abandoned due to Greek naval strength and operations in the area. So the Turks had to rely on troops already in the area, some of whom proved to be of poor quality.
Montenegro was the first member of the league to declared war on 5th October 1912. The official start of the war was the 17 October 1912 the same day the Bulgarian Army Crossed the border and attacked Eastern Thrace.
The conflict can be divided up into areas or ‘theatres’ for ease.

The Epirus Campaign
The Greek army of Epirus crossed the border on 19th October moving northwest it occupied the town of Philippias on the 26th October. Dividing the force one part moved to Preveza and laid siege to the old fortifications, which held out until the Turks surrendered on 4th November.
The second force headed north where Greek forces encountered heavy resistance, this slowed their advance. After the surrender of Preveza on the 4th November Greek forces were reinforced with an Italian volunteer corps under the command of General Ricciotti Garibaldi, son of the famous Giuseppe Garibaldi. Strong resistance meant that the Greeks didn’t arrive to lay siege to the city of Ioannina (Janina) until 25th November. Reinforced by volunteers and irregulars from Crete and Greece, the Greek army faced a heavily fortified city; which itself had been reinforced with Albanian irregulars and Turkish troops retreating from Macedonia.
Despite skirmishes and assaults the defenders held out and the siege continued until the end of the war.
The war was ended with the Treaty of London in May 1913. The following month the Second Balkan War broke out when Bulgaria attacked its former allies, Serbia and Greece.


BATTLE REPORT
This Battle Report is from a test game played at the club in preparation for the first showing at Vanquish. Rules used are Chain Of Command by Too Fat Lardies. 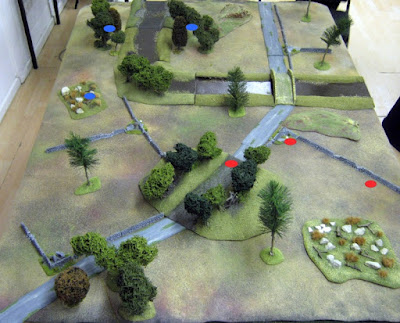 A Blog for Tring Wargames Club - Why?

Today I decided to start a Blog for Tring Wargames Club. Why?
We already have a website where there is loads of information about the club plus all the latest news and reports. It's got to a point where the website has become quite large with many pages that may never be found by the casual visitor.
We also already have a facebook page which highlights news and upcoming events with the chance to post comments and "Likes", etc.
I thought it would be a good idea to have a blog where we can put the latest Battle Reports, news, and interests from the club. Here things can be discussed at greater length than on Facebook and with more emphasis on current activities than on the website.
Well that's the plan.

Posted by Colin's Wargaming Stuff on April 17, 2016 No comments: