The Men Who Would Be Kings League...and more.

We had two games in the club TMWWBK league playing the the club last night, as we enter the 4th round. We are playing our way through the scenarios in the book, so there will be 8 rounds for the 8 scenarios. We are playing the games at the skirmish level, ie half sized forces. I decided to go this route as most of the people who wanted to play the league could field armies this size from they existing collections. It also meant that those who wanted to build a new force for the league could do so quite quickly.

We had a couple of interesting mash-ups last night. On one table my Herero tribesmen faced Jon's Colonial Belgians, while on the other table Mark's Colonial British faced Colin's Warlord Era Chinese!

The scenario was "Get Off My Land", and I had to scout 6 designated points on the table, whilst Jon's Belgians tried to see me off. At first it looked a daunting prospect, given the Belgian's fire power (2 European units of regular sharpshooters and 2 units of irregular askari). I had 5 units of irregular riflemen, but only 1 unit had modern rifles, so his sharpshooters out ranged most of my units. But rolling for leadership helped me, Jon got mostly 7+ leaders, whilst mine were all 5+ and 6+. This would make me more manoeuvrable and give me a better morale. However as all his units could shoot without needing an order, he could still just stay in place and gun me down.

I started off by using my modern rifles to pick off some of his sharpshooters, whilst the others either rushed for the objectives, or tried to close the range. It started well, I killed 2 men from the sharpshooters in the open and reached 2 objectives in the first move. My mounted unit skirted wide to try and stay out of range of the sharpshooters and made for one of the furthest objectives. Jon failed to move his askaris, his weakened sharpshooters only hit 1 man and my morale held, but the sharpshooters in the jungle cut down 2 men from the unit in contact with the nearest objective and pinned them. I rallied them, but the pattern repeated for the next couple of turns, Jon fired, pinned me, then I rallied until the unit was wiped out. On other side of the table I claimed my first objective and massed three units to fire at the exposed sharpshooters. They killed a couple of my figures but I took them all down.

In the meantime Jon had pulled his askari back to cover the objectives closer to his baseline, but on the right flank my mounted infantry got there first. Two objectives to me and one of the askari started to move back to support the remaining sharpshooter unit, we had both now lost a unit, plus I had one unit down to 1 man. My remaining infantry got into cover and started a firefight with the Belgians whilst my mounted unit grabbed another objective. In so doing they lost 2 men but their morale held. A lucky shot pinned the Belgians and the mounted unit rushed up into close range. they rallied but took another kill and were pinned again, just as their askari arrived to help them. Now the game changed as Jon's attempt to rally the sharpshooters failed, even better they routed off the table.

All my units moved in on the unfortunate askari, who were soon pinned and retiring. They still held off a charge from my mounted infantry, sending them reeling with a bloody nose but could not stop me  grabbing 2 more objectives. At this point I called ahalt and announced I would withdraw. Jon had an untouched unit, in cover, protecting the last objective, I had 3 half-strength units remaining. I was in no position to make an attempt to the last objective at this point. Adding up the Victory Points I scored a massive 18 to Jon's 4. My first win in this league! Over on the other table, the British failed to prevent the Chinese scouting their territory, another victory against European Imperialist Aggression.

This raises an issue we have experienced with TMWWBK. The rules are great an a lot of fun. I have played skirmish level games with up to 6 players and full size games with 24, 36 and even 40 points with no problem. But the scenarios in the book do not seem to be balanced. We have played scenarios 1, 2 and 3 four times each and scenario 4 twice, so far the defender has won every single game. We will see how the rest of the league games go. 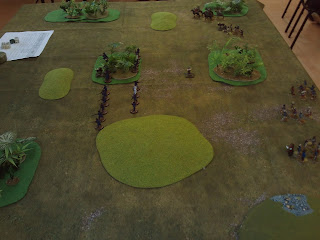 The opening move in our game, 2 Belgian sharpshooters down already! 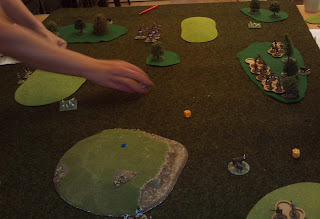 On the other TMWWBK table the British seem to have disappeared! 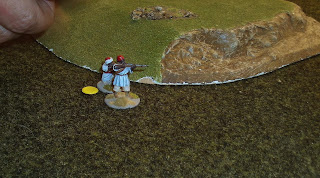 A rather depleted askari unit is pinned. 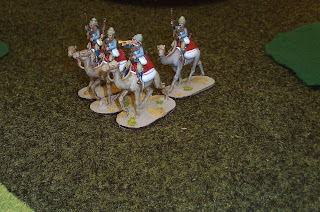 
Other games at the club:

A 28mm Chain of Command game. 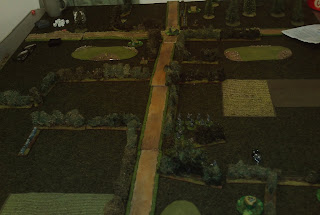 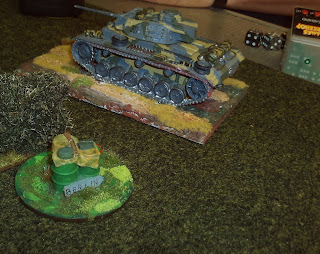 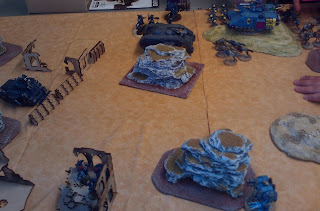 And, just for a change, a bicycle racing boardgame! 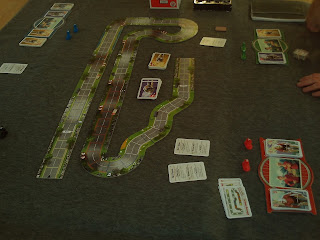 I had a go at the cycling game as well and it was a lot of fun.