Part 2 Sipahis of the Porte

To keep things sensible I've split up the cavalry by type and will process them in units. First up, the elite cavalry of the Ottoman army, the Sipahis of the Porte. Also called the Kapıkulu Sipahi these were salaried, regular units which formed the cavalry arm of the Ottoman household troops. These were the first figures to be re-based, washed and varnished, then had the bases textured with a mixture of brown paint, sand and pva glue, before tufts of grass were added. I shall probably add a bit of static grass at a later date. Due to extensive house rebuilding most of my gaming stuff is in the loft and at the moment I've no idea where my flocks and grasses are!

After a grey wash and a coat of varnish. 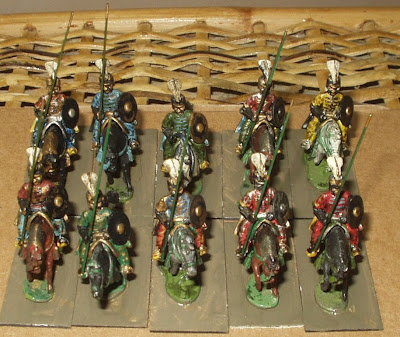 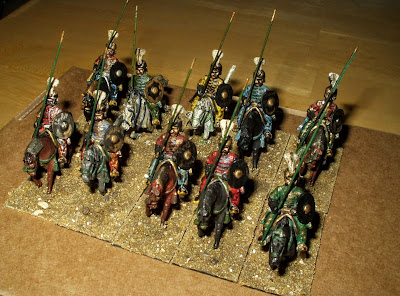 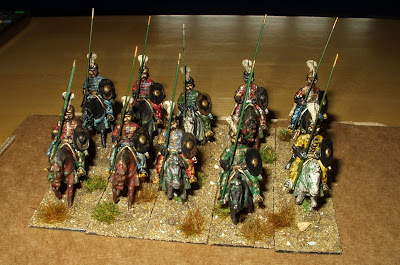 At the Tring Club we recently were contacted by a chap who offered to give away his wargames collection to any members of the club who wanted to use them. These were old 25mm wargames figures that hadn't seen the light of day since the early 1980s, but it was still a generous offer, which we gratefully accepted.

I ended up with a box labelled 17th century Ottomans and Poles. This contained about 300 painted 25mm figures, mostly a mix of Hincliffe and Minifigs, with a sprinkling of other manufacturers, the majority unbased or on flimsy bits of card, riders not stuck onto horses, loose spears etc. These bought back memories as they were the sort of figures I started gaming with back in the early 1970s. Once I'd got them all sorted out I realised that the Poles were quite incomplete, missing winged hussars or other heavy cavalry, so I put them aside for the time being.The Ottomans, on the other hand, seemed to be a viable army as they stood, comprising of 46 cavalry, 90 infantry and 2 cannon with 11 gunners. Admittedly the normal Ottoman army would have a higher cavalry to infantry ratio, but these would give me a playable army "out of the box".

My aim is to get these onto the table as quickly as possible, so no repainting other than a quick touch up of obvious damage, a wash and a coat of varnish. I'm not sure of which ruleset I will be using at this stage so the basing will be to be as generic as possible. I'll put the cavalry on 25x50mm bases and the infantry will probably end up on 25mm washers.

So here they are at the first stage; 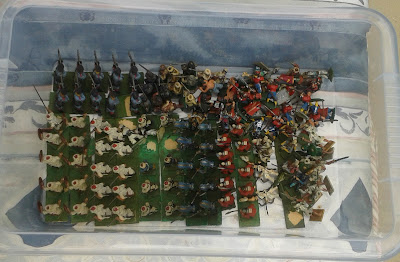 Some of the Cavalry 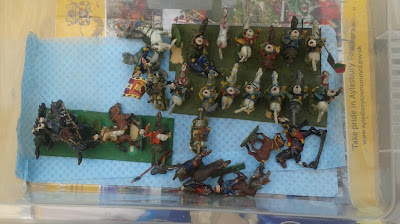 Sipahis stuck onto horses and rebased. 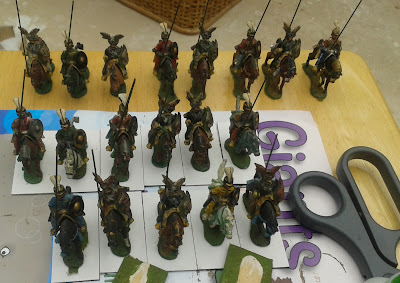 Friday was a sad day for my Islemen in Round 4 of our Lion Rampant League. They were tasked with stopping Henry's Welsh from escorting The Messenger (Scenario H) from the NE corner of the table, to the SE corner. It did not  go well for the Islemen.
The Lion Rampant rules were written by Daniel Mersey and published by Osprey.

Read the rest of this Post »
Posted by Colin's Wargaming Stuff on July 11, 2016 No comments: