Mark and I had one more test run of my Soldiers of God adaptations before we play a big battle at the March TWC Games Day. Once again Mark led the forces of Angmar against an alliance of Dwarves of the Eded Luin and Elves from Lindon. 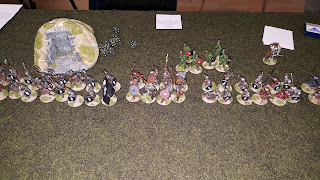 The Angmar used their usual deployment, uruks in the centre, backed by the Bodyguard unit and some trolls. 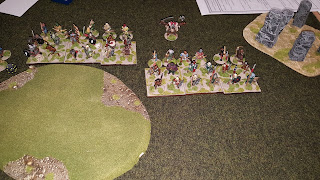 A horde of snaga as speed bumps on the left flank. 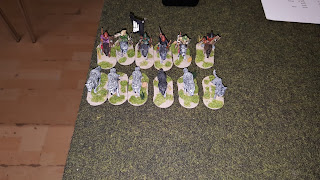 And wargs and warg riders to make a sweeping outflanking movement of the right flank. 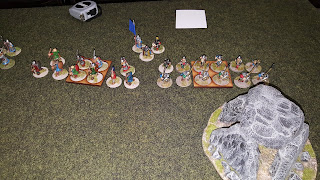 A unit each of dwarf spearmen and archers face of against the wargs.... 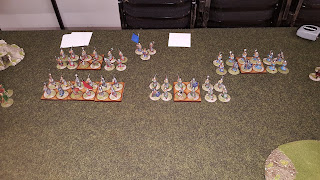 ...to guard the flank of the centre battle, all dwarf axemen and the Royal Huscarls. 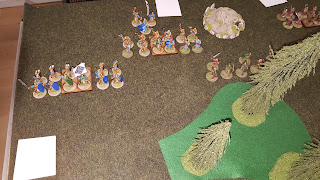 Whilst on the right flank the elves form up. My intention was to try and hold off the wargs, while the centre big-hitters got stuck in. The elves would, hopefully, quickly deal with the dross in front of them and then swing around into the flank of the main action, in the centre.
Of course such a plan required the elves to rapidly move forward and engage the enemy, which require movement orders (of which I suffered a severe lack for most of the game!). 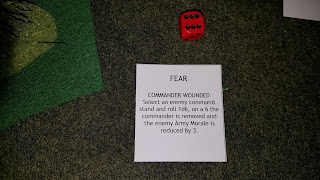 First move of the game and I drew this card. No one was close enough to use the FEAR order, so I took a punt at the "Commander Wounded" option. A stray arrow flew out of the elvish ranks and plummeted down into the mass of snaga....and I rolled a 6. The orc commander on the left flank was dead and their army morale dropped by 3 - as they started on 15, this was a good start for me! 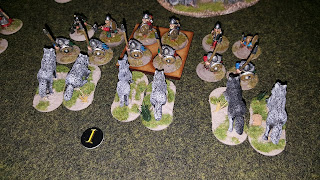 I suspected the devious Angmar general was going to use his wargs' sneaky ability to flank march off table, so I used an "Impetuous Charge" card to force one of the units into contact with my dwarf spears. The wargs died quite quickly, but his warg rider unit promptly disappeared off the table on it's sneaky mission. 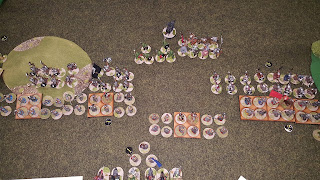 The centre battles clash together! Mark suddenly realised that he didn't have enough room to squeeze both the bodyguard uruks and the trolls into the gap in the middle, so he dithered for a bit to get the trolls up in front. But his pesky warg riders turned up behind my centre and promptly charged the dwarf king! 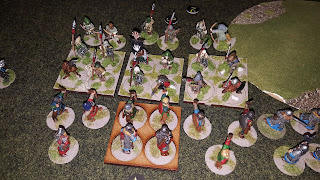 Mark had a unit of snaga guarding the flank of his centre, now that the wargs and warg riders were no longer there, but the dwarf archers started inflict heavy casualties. The small orcs charged the bowmen, but the dwarves rolled just as effectively in melee as they had shooting. 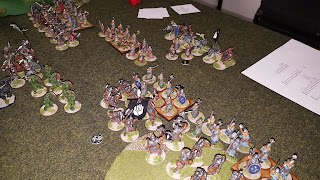 Another view of the hack and bash in the centre. 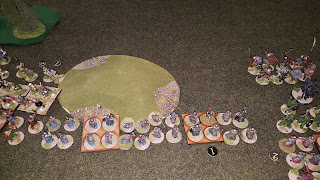 Under pressure form two axe units, one of the big uruk units routs. To the right of the picture you can just see the trolls have now engaged the dwarf unit in front of them. 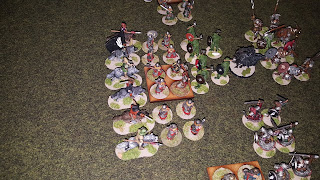 The dwarf king is cut down by the warg riders, who then charge into the rear of the dwarves facing the trolls.
I had incredible luck at this point. Each side has two, one-use cards, in the deck, which enable them to rally off all the hits from a single unit. I drew my card two turns in succession, which meant that I was able to save the surrounded unit twice when they should have routed. This allowed me time to bring one of the victorious axe units around and into the flank of the warg riders. 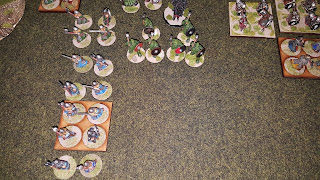 The final situation. The surrounded axemen and the warg riders broke at the same time, but my army morale was still good whereas the Angmar morale had reached zero. The forces of darkness fled leaving the good alliance holding the field.
It was the luck of the cards, Mark had not drawn a single Rally card once the main fighting started and if I hadn't been able to stop that axe unit from routing for two turns, it would have been a completely different battle.

Also being played at club this week. 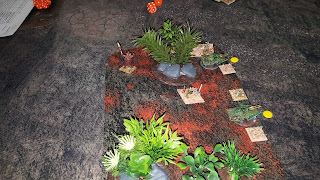 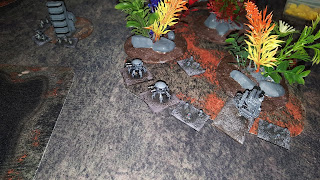 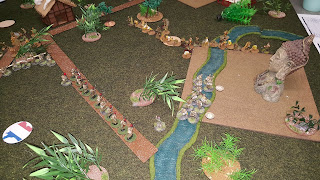 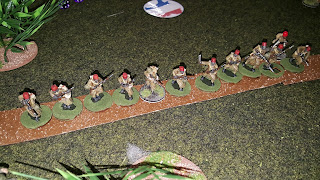 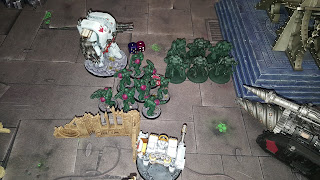 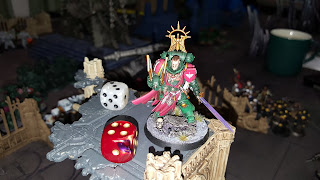 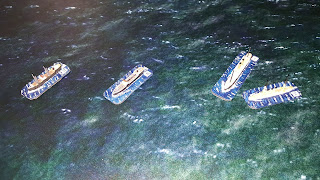 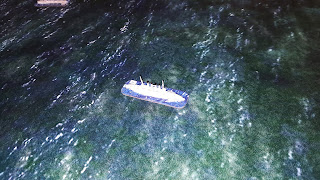 And another Warhammer 40K game. 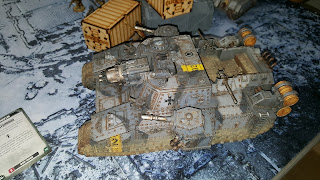 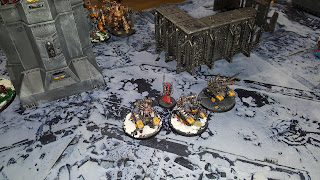