Frostgrave - Not a Good Night to be a Wizard

Mark and I played a couple of games of Frostgrave at club last week, my Necromancer and his orcs against the diminutive hobbit warband, which turned out to be a bit of a bloodbath for the magic users. Once again I used my 3x3 cobblestone mat from Ceri Designs, at just £19 this has been a bargain with loads of different uses.

The first scenario was "Genie in the Bottle". The angry genie turned up very early and the game was mostly comprised of running away or hiding from the genie, or else trying to lead it on to your opponent. Early on I put down a wall of fog to cut off the LOS to a treasure for the hobbit apprentice and his bowman. Unfortunately the hobbits came  through the fog and picked up the treasure triggering the genie on my side of the fog. The little sods then legged it through my fog, leaving the genie to hare off after my Necromancer! He managed to avoid the genie by letting it take on one of the orcs, who somehow survived by pushing the genie back in combat and diving out of sight.

In evading the genie however, my wizard out himself into the path of a hobbit bowman who promptly shot him through the eye, killing him outright!

I did manage to get everyone out of LOS of the genie, who them wandered off randomly, straight through the fog and onto the hobbits. It promptly killed both an archer and the apprentice in hand to hand, then took an elemental bolt from the hobbit wizard, which hurt it, but didn't kill it. The genie returned the compliment with a fire arrow which killed the hobbit wizard.

As the only magic user left alive my apprentice decided to call it a day and the orcs slunk off with 3 treasures. What was left of the hobbits also scarpered with 2 treasures. 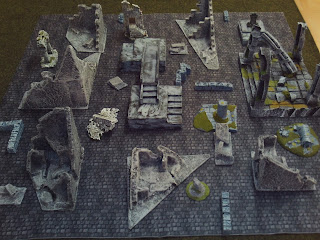 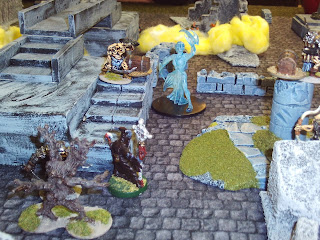 The genie appears and heads after the Necromancer..... 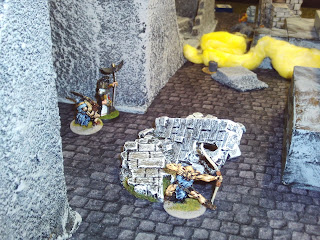 ...whilst his apprentice keeps his head down. 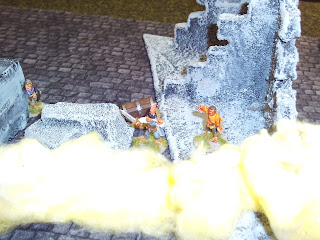 The hobbits chuckle away behind the fog.... 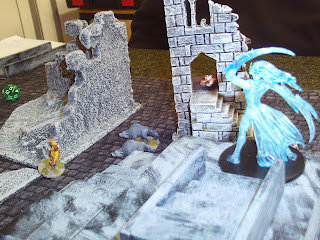 ...not for long, you can just see the dead wizard in the doorway.

The second game was "The Worm Hunts". This was a more of a battle, with much toing and froing. The two wizards spent quite a bit of the game trying to knock each other off, chucking bone darts and elemental bolts back and forth, with much to show for it. My orcs did manage to bag a couple of the little runts and snaffled 3 of the treasures. The worm finally appeared by the last treasure and from then on things got silly as fog and wall spells appeared all over the place as we tried to protect our own warbands and funnel the beastie off onto the opponent's.

A brave hobbit managed to climb to the top of the highest building (where Mark had helpfully placed the treasure) and climb down again with his ill gotten gains, but was caught and eaten before he could get off the table. once again we both considered discretion to be the better part of valour and left the last treasure to the worm.

Other games being played that night were a 6mm Napoleonic battle using Black Powder. 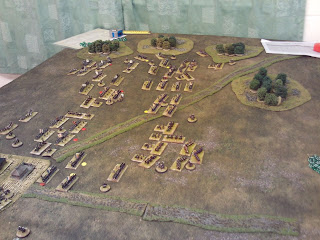 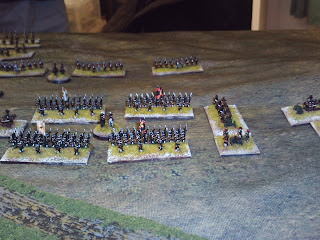 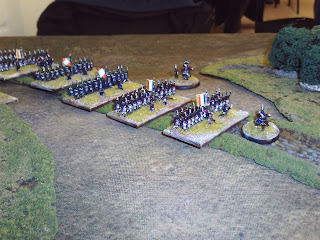 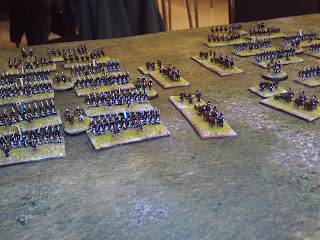 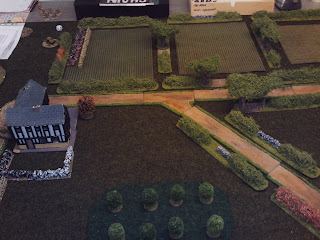 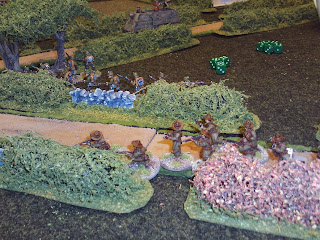 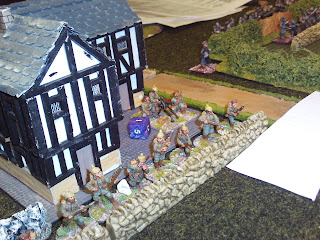 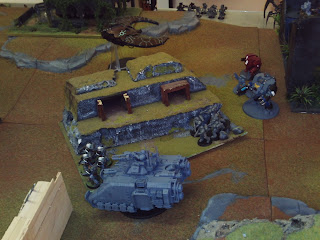 Space Marines vs something else. 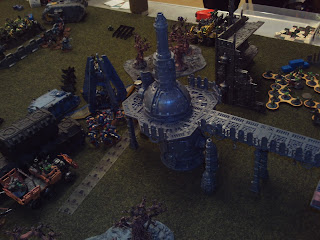